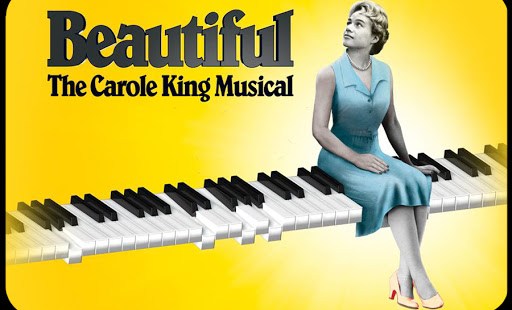 It might be a musical about Carole King, but it is very much actress Jessie Mueller’s show.

When Carole King’s pop album “Tapestry” was released in 1971, it went on to hold the longest record for the number one selling album in the country for over twenty years straight. Forty years later, it remains one of the most popular albums of all time. With hits like “A Natural Woman,” “You’ve Got a Friend,” and “So Far Away,” King cemented her reputation as one of the great singer-songwriters of the 20th century. What’s not as well known about her is that she was a successful songwriter for other singers long before she began performing her own music. This is the story that’s told in the newly opened Broadway musical, Beautiful: The Carole King Musical.

Born a Brooklyn girl, King began writing music as an early teenager and had sold her first song by age eighteen. While at college she met Gerry Goffin, whom she would later marry and have two daughters with, while collaborating with him as her lyricist. During this time the two would churn out such classics as “Will You Still Love Me,” “The Loco Motion,” and “It Might as Well Rain Until September.” Their music was sung and recorded by the likes of the Monkees, the Beatles, and the Shirelles.

With a snappy and well paced book by Douglas McGrath, the first act of Beautiful chronicles King’s initial rise to stardom, along with hers and Goffin’s developing friendship with another singer-songwriter couple, Cynthia Weil and Barry Mann who wrote in the office next door to Carole and Jerry. Together Weil and Mann would write hits such as “Who Put the Bomp” and “On Broadway.” Beautiful is undeniably a jukebox musical jammed full of all of these classic hits, but for lovers of this era, it’s more than just a stroll down memory lane—it’s a reincarnation of some all time favorites, as this cast delivers some unforgettable performances.

The second act of Beautiful reveals the less glamorous side of King’s life as she divorces Goffin after she discovers his numerous extramarital affairs and decides to relocate with her girls to Los Angeles. It’s there where her songwriting becomes a form of therapy and healing and she gains the confidence to perform her own work herself. The rest, as they say, is history.

In the star turning title role of Carole King is Jessie Mueller who made her Broadway debut a few year’s ago with a Tony nominated performance of On a Clear Day You Can See Forever. Her performance as King is a revelation, securing her an immediate spot in the pantheon of the great living female stage actresses of our day. Her voice is tender and reminiscent of King’s, but very much alive with a subtle energy and grace of her own making. From the moment she opens the show sitting at a grand piano performing “So Far Away,” she commands the stage and entrances the audience alike. This might be a musical about Carole King, but it is very much Mueller’s show.