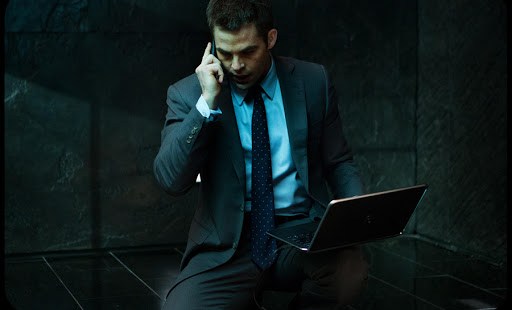 Does director Kenneth Branagh pull off the Jack Ryan reboot?

While watching Jack Ryan: Shadow Recruit, one gets the distinct impression that the character of Viktor Cherevin desperately wants to be a James Bond villain. You see, he's got a maniacal plan to destroy the economy of the United States (sure, you could make the argument somebody has already beat him to the punch on that, but still, he has a plan), he has unlimited funds to carry out his evil schemes, and he has all the hubris required of a would-be world conqueror. Cherevin has everything he needs to make his dream of matching wits with James Bond come true… except for James Bond himself. No, in lieu of a dashing and debonair nemesis, the foe Cherevin has to face instead is Jack Ryan the Shadow Recruit as played by Chris Pine. Yeah, it's not quite the same, is it? So, in resigned disappointment, Cherevin, as well as the movie itself, just kind of coasts along in a lackluster manner, never really reaching their full potential.

Now, it all starts okay enough with a montage of pre-title sequences introducing this new version of Jack. You see Jack as he attends college majoring in finance, but his patriotism is spurred by the 2001 terrorist attacks on the World Trade Center, so he puts his career plans on hold, enlists in the military, and heads off to Afghanistan. After his helicopter is shot down, Jack (we are told, not shown) heroically drags two fellow soldiers to safety despite his own back being broken (the first of the movie's many moments in strained credulity). and is subsequently sent to John Hopkins to recover and regain the full use of his legs. It's there that he not only first meets his physical therapist/future fiancé, Cathy (Keira Knightley), but also comes under the watchful eye of Thomas Harper (Kevin Costner), a veteran government spook who sees potential in the young analyst/soldier.

It's while working for Harper as an undercover operative in a large Wall Street investment firm that Jack uncovers a looming terrorist threat. Putting his higher education skills to work, Jack has determined that someone plans to crash the U. S. economy through a coordinated physical/economic attack, one that can only be stopped if someone retrieves the necessary financial records from Russia. Being the only person employed by the United States government who understands international finance (I'm not sure if this strains credulity or is pretty much accurate), Jack is ordered to undertake the assignment himself, despite the fact that (1) Harper promised him he would never have to do field work or carry a gun, and (2) Cathy knows nothing about her fiancé's side job as a spy, so he must lie to her about his reasons for going.

Immediately upon arriving in Russia, Jack is set upon by an assassin and is forced to kill a man for the first time (apparently the only action he saw in Afghanistan must have been when his helicopter went down), an act which weighs heavily on his mind. After surviving  the attempt on his life, Jack finally meets with his nemesis, Cherevin (Kenneth Branagh doing double duty as actor and director), only to find that the villain has destroyed most of the necessary evidence needed to head off the terrorist attack. The only way to get the information now is to break into Cherevin's office and retrieve the data directly from his computers, which means someone will have to distract Cheverin long enough to allow this to happen. Fortunately, a suspicious Cathy has followed Jack to Russia and, as luck would have it, she brought  along some low cut formal wear, reads the same Russian novels as Cheverin, and has expert knowledge about the medical condition he suffers from. She makes for a fine distraction, and once she learns about Jack's secret life, decides to join in the mission, a choice Harper seems okay with despite her complete lack of training.

From that point on there are plenty of chases, gunfights, lots of procedural technobabble, and an obligatory explosion or two. You can pretty much check off the plot points as they happen. Don't get me wrong, Jack Ryan: Shadow Recruit is not a bad movie. There's nothing exceedingly wrong with it. It's a perfectly serviceable spy thriller that hits all the necessary beats. It's just that the beats are ones we've all heard plenty of times before and this time around they're being played by a not particularly memorable cover band instead of the real thing.