“Her”: Love in the Age of Chimeras 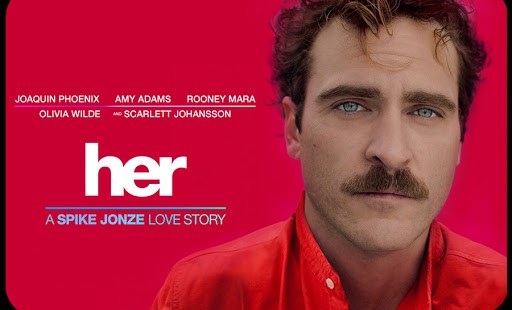 What if technology could completely replace relationships?

“Who are you? What can you be? Where are you going?”

Theodore Twombly stops in his tracks, hooked by an ad for the word’s first artificially intelligent computer. “It’s not just an operating system,” the ad promises. “It’s a consciousness.”

So begins Theodore’s foray into a relationship with binary code – and the audience’s one-of-a-kind excursion through a layered but disquieting “love” story.

Her, the latest film from music video director turned auteur Spike Jonze, introduces us to a not-too-distant future Los Angeles, where videogames are all 3-D, a Siri-like assistant occupies every ear, and high-speed trains replace the notorious LA traffic. High-waisted pants have apparently made a killer comeback, but besides that nothing really seems too far-fetched. This is 2034 – maybe even 2024 – and to Jonze’s credit, it’s eerily believable.

Theodore (a surprisingly subdued Joaquin Phoenix) is isolated and emotionally detached, despite writing “Beautiful Handwritten Letters” for people too harried or distracted to write their own. In fact, the people in Jonze’s world seem to have been pulled in so many digital directions for so long that they’ve accepted distraction as the basic fabric of existence.

But uneasiness erupts in Jonze’s world as it does in our world. Insomnia, audio trysts with strangers, video games replicating a mother’s household duties – all of it points to a certain longing for the “old way” of connection, of a manner of being and speaking that feeds off the messiness of presence, not disembodied fantasies.

Theodore, trapped in a feedback loop of free-floating malaise and self-destructive relationships, is no different, and decides that purchasing an AI system seems as good a way to be “distracted from distraction by distraction” (to use T.S. Eliot’s phrase) as any.

Gradually, he begins to do what anyone who saw the trailer knew he would (and probably hoped he wouldn’t) do: he falls in love with his operating system (or OS). Samantha, voiced by Scarlett Johansson, sounds as natural as any person, and mimics humor, regret, sensuality, spontaneity, growth, and the whole panoply of human emotions and behaviors.

But the fact that Samantha is not only not a person, but not even really conscious, haunts Theodore – and us. In fact, as philosophers of mind like John Searle and Hubert Dreyfus have long pointed out, no matter how well a computer replicates awareness by obeying certain rules, the entire process could easily bypass understanding, just as a man hidden in a room might follow be able to follow complex rules to write Chinese characters onto pieces of paper without actually understanding a word of Chinese (Searle’s famous “Chinese Room Argument”).

Jonze hands us all the trappings of new love on a silver platter: elegant music, jealous outbursts, that swirling and giggling in public moment. But at the end of the day, Samantha is nothing but a chimera, a grand illusion; and this Kafka-esque, almost solipsistic substratum hollows out the emotional waves that make up the rest of the film. In fact, those hollow waves – waves where something like romance should live – only seem to heighten the discomfort.

To be sure, Joaquin Phoenix and Amy Adams deliver wonderful performances, both of them worlds away from their psychotic characters in The Master. And Spike Jonze has crafted a solid film with worthy insights: on the way technology affects relationships in the digital age; on the modern de-emphasis of embodiment; on our zeitgeist’s sense of disconnectedness in an age of hyper-connectivity. Her is also drawing comparisons to Eternal Sunshine of the Spotless Mind, a similar film which says so much about love through its bizarre structure.

But Jonze’s story seems to do the opposite: it gazes on the bizarreness of man through a romantic structure. “With you I’m safe and a million miles away,” HAL 9000 – I mean, Samantha – sings to Theodore. We might be tempted to sigh and ponder our own loves, until we remember that no one is really there singing with him. Theodore is with…Theodore. “You always wanted to have a wife without the challenge of dealing with anything real,” Theodore’s ex announces in one scene. “I’m glad you found someone. It’s perfect.”

Although Her is a captivatingly original story, and ends on a note of hope, it’s anything but de-lovely. In fact, if this film is about love at all, it seems to be a story about the suffering of being unable to love – a state, incidentally, Dostoevsky once termed hell.