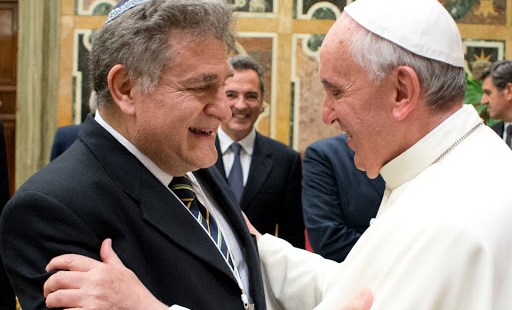 Argentinian Rabbi speaks about his work with the Holy Father, the Jewish – Catholic dialogue and the next steps forward.

After a private audience with Pope Francis on Thursday, Rabbi Abraham Skorka – coauthor of the book “On Heaven and Earth” along with the Holy Father himself – gave a conference on "The Jewish-Catholic dialogue 50 years after Nostra Aetate [In our Age]: A Latin American perspective”.

Moderating the conference was Cardinal Kurt Koch, President of the Pontifical Commission for Religious Relations with Judaism.

The 63 year old Argentinian Rabbi, who was the first Jew to be awarded an honorary doctorate by the Catholic University of Argentina, has played a key role in South America in the development of a fruitful dialogue between Catholicism and Judaism. He spent many years in close collaboration with his good friend Jorge Bergoglio, now Pope Francis, who worked together to arrive at a greater understanding between the two religions, a goal that Francis has continued to work towards during his Pontificate.

Skorka brought a distinctly Latin American perspective to the conference, providing a historical context of how intercourse and reconciliation has developed between Catholicism and Judaism over the last century within Argentina.

Among other significant historical moments Skorka referred to the political and social crisis of 2001 in Argentina which led to a “moment in which both the Jewish and Catholic religious institutions of the country were called to collaborate in a profound sense to help those most in need.”

“In this crisis something very important happened” said Skorka, “people started asking who can we trust? This is where the religious institutions came to the fore. We joined forces; it was a time of pragmatic and tremendous religious dialogue, it was a time where we reached out to our brothers and sisters in need.”

The two religions became united in their mutual desire to help their fellow mankind in its suffering.

Nostra Aetate: the beginning of a journey

Skorka also emphasised the importance of the document Nostra Aetate (1965) in the development of the reconciliation between the two religions in the second half of the twentieth century.

In particular reference to Judaism, the document states: “Since the spiritual patrimony common to Christians and Jews is thus so great, this sacred synod wants to foster and recommend that mutual understanding and respect which is the fruit, above all, of biblical and theological studies as well as of fraternal dialogues.”

Since this significant Vatican Council II declaration came about “we can observe a long journey which has been cultivated by hard work, dedication and spiritual feeling, in the world and especially in Latin America” Skorka affirmed.

Furthermore, today, both a theological and fraternal approach is precisely what both Pope Francis and Rabbi Skorka endorse as the way forward for a continued flourishing in the Catholic and Jewish relationship, thus in their turn continuing down the road that Nostra Aetate began 50 years ago.

The Rabbi also added that a very important issue today is to make sure that the dialogue is brought down to the popular level for people of all social backgrounds, “to ensure that social differences will not be an obstacle towards peace and co-inhabitance.”

Skorka then quoted the Holy Father’s reply after had asked him what the next steps were: “lets take some time to be together, lets take a coffee, work together, take actions together, help those in need.”

However Pope Francis also strongly emphasised the importance of taking a theological approach:

“Reflecting on these theological answers, what is needed from an existential point of view, and what Pope Francis emphasised to me,” said Skorka, “is that we need to have a very clear idea of what a Jew means to a Catholic and what a Catholic means to a Jew.”

A meeting between friends

Skorka also described the private audience with his old friend, now the “man in white”: "from a personal point of view it was reuniting with an old friend” said the Rabbi. However the meeting itself comprised “a group of representatives of the Jewish Community in Buenos Aires.”

“The themes that we dealt with were many of the different problems that affect man in general, and in particular some specific problems that have afflicted Argentina.”

“We briefly analysed all the methods that we could use to eliminate the barriers of hate that exist not only in Argentina but all over the world, in the different social groups; how we can go forward in a profound way in our religious dialogue; to see what is happening in today’s “culture” where in many parts of the world, especially in Argentina, violence and degeneration has dramatically increased in the recent years.”

Skorka made reference to Pope Francis’ significant upcoming trip to Israel. “Obviously for me as a Jew, this is a very sensitive issue” explained the good Rabbi. “But when he [Pope Francis] announced that he would be going to the Middle East and to the Holy Land, he used the term ‘pilgrimage.’”

He continued: “What I expect and what I ask God and wish from the bottom of my heart…is for him to leave a message of peace that might inspire a dimension of peace for all.”

“We the Jewish people ask for peace every day in our prayers, we dream every day for Israel to be a land of peace.”

He referred to the form of paganism that plagues today’s societies, that of  “transforming economic power into a God” which he described as a “spiritual emptying.”

“We need to consider ourselves as being part of God’s plan, but the Muslims, Christians, Jews must be frankly and profoundly religious… we must not wage wars that kill each other, this is what dialogue leads towards, this is what we dream of and what we aspire to achieve.”

He finished by saying “I hope that he [Pope Francis] may be helped by the Lord to touch the hearts of all people of Israel, …that he can leave a mark so that when the representatives of the state of Israel meet with their counterparts in Palestine they can refer back to this inspiration that may be left from this mark of peace.”