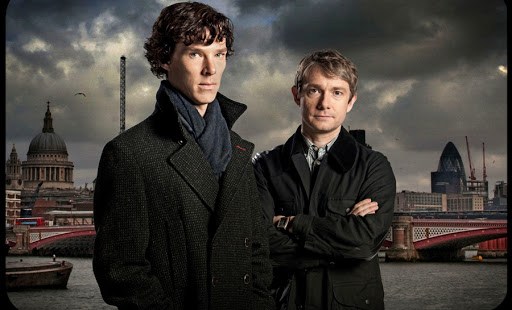 PBS Masterpiece’s hit show Sherlock, an edgy, 21st-century updating of Sir Arthur Conan Doyle’s famous detective series, returns this Sunday evening, January 19, for a much-anticipated Season 3 (you can follow the countdown clock on the Masterpiece website). As the Season 2 cliffhanger was the revelation that Sherlock’s death at the hands of the evil genius Moriarty was only apparent, fans of the show will be eager to learn just how Sherlock (Benedict Cumberbatch) will make his dramatic return to the land of the living, and how his beleaguered friend, Dr. John Watson (Martin Freeman), will handle it.

The return of this series invites the question: what makes Conan Doyle’s character so perennial? What explains it?

To answer this question we must first understand what a mystery is. The detective mystery, like all mysteries including theological ones, is a form of paradox. In encountering paradox we experience the shock of (apparent) contradiction. “Silver Blaze,” one of Conan Doyle’s most popular Sherlock Holmes stories, involves a horse trainer found dead on a moor. A London bookmaker has been arrested for the crime, but the facts don’t add up to a conviction. Holmes, and the reader, are thus faced with the shock of contradiction: a man is dead, yet there is no clear cause of his death. An even more profound shock occurs when we encounter a theological paradox. “The last shall be first.” “Three persons in one God.” What do these statements mean? How can they be?

The role of the sleuth and the role of the theologian are similar: each one tries to solve a mystery. The climax of each endeavor is a moment of illumination in which what seemed contradictory is shown not in fact to be so. Theological illumination, however, always remains deficient. Despite the abundant wisdom in St. Augustine’s De trinitate, it does not wholly illuminate the mystery of the Trinity. But in a detective story, the climax is usually wholly illuminating as the culprit is discovered and apprehended.

Two sorts of illumination can be found in detective stories. One sort, call it the Sherlock Holmes sort, sees the paradox or mystery as a riddle or challenge resolvable by the “scientific” discovery of causal linkages. Here, the detective’s illumination is merely material and mechanical. This sort of illumination is interesting and entertaining, and, judging by the enduring popularity of Sherlock Holmes and his many literary and cinematic heirs, it shows no signs of waning. But another sort of illumination found in detective stories is the Father Brown sort (which I name after G.K. Chesterton’s famous priest-detective). Here, the detective’s illumination involves the discovery of material causes, but also, and more importantly, the illumination of causes (moral, spiritual, diabolical) that transcend the material world. These two sorts of illumination are not at all mutually exclusive. They exist along a continuum, and often are in play in the same story. Still, distinguishing them helps us identify tendencies within detective mysteries.

As a man devoted to the illumination of material causes, Sherlock Holmes is a thinking machine. His world is one of data, “facts”, sensible stimuli. These facts can sometimes seem to contradict one another. Yet a mind sufficiently responsive to the facts, like Holmes’s, can understand them as “clues” which can illuminate or resolve mystery. The same mode of inquiry is on display in practically every mystery we read or watch, whether it’s a work by Agatha Christie or Henning Mankell, or an episode of CSI or Bones.

I don’t mean to deny that there is real moral, interest in stories featuring such thinking machines. There are criminals to be apprehended and justice to be served. It’s also worth mentioning that  these thinking machines often display certain impressive characteristics, principally a kind of cunning and courage.