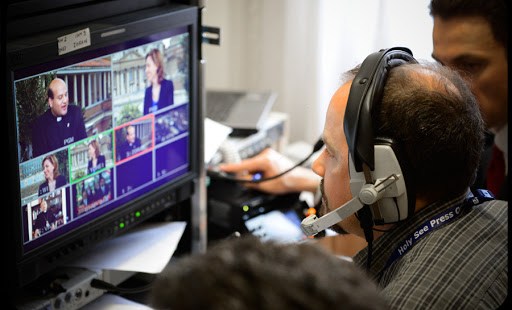 Pope Francis met with a broadcasting organization on the occasion of its 90th anniversary for radio, and 60th for television.

In meeting with the employees of Italy’s national broadcaster, Pope Francis stressed the importance of responsible communications rooted in truth, noting its role in forming persons.

“The ethical quality of communications is the result, ultimately, of a careful conscience, not superficial, always respectful of people, both those who are the objects of information and those who are the recipients of the message,” he said at a Jan. 18 audience with the directors and staff of RAI.

“Each one, in his own role and with his own responsibility, is called to be vigilant in maintaining a high level of ethics in communications, and to avoid those things which create so much damage: disinformation, defamation, and slander. Maintain the level of ethics.”

Pope Francis met with the broadcasting organization on the occasion of its 90th anniversary for radio, and 60th for television.

The Roman Pontiff reflected on the longstanding collaboration between RAI and the Vatican’s radio and television services, noting that the partnership has allowed the Italian people “to be able to access the words, and successively, the images of the Pope and the Church.”

“We think of the Second Vatican Council, of papal elections, or of the funeral of blessed John Paul II,” for example, he suggested.

“Recalling such a rich history of accomplishments also calls us to a renewed sense of responsibility, for today and tomorrow.”

Pope Francis then issued some challenging words to his audience.

“The past is the root, history becomes the root of new impulses, the root of present challenges, and the root of a future to move forward towards! And that future isn’t found without the responsibility for our identity.”

“I remind you that your profession, in addition to being informative, is formative; it is a public service, that is, a service for the common good, a service for truth, for goodness, and for beauty.”

The various professionals at RAI, including “executives, journalists, artists, clerks, technicians, and workers,” said the Pope, “know they belong to a company that produces culture and education, that offers information and shows, at every moment of the day reaching a large part of Italy.”

“It is a responsibility which he who is owner of a public service cannot abdicate for any reason,” he said, expressing his hope that they would “place themselves at the service of human, cultural, and civil-societal growth” with “determination and perseverance.”

Pope Francis then concluded by wishing the attendees a good new year.

“I wish you to work well, and to put faith and hope in your work, to be able to convey this, because there is much need of it!”