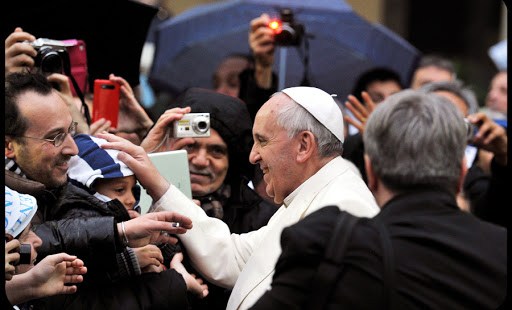 While located in Rome’s geographical center, three miles east of the Vatican, Sacred Heart is in an “existential periphery” of the city.

Pope Francis, the Bishop of Rome, made a pastoral visit to one of his parishes Sunday, choosing one situated in an area filled with migrants, refugees, homeless persons, and itinerants.

During his Jan. 19 visit to Sacred Heart of Jesus at the Praetorian Barracks, Pope Francis said Mass in the evening and met with members of the parish, including the homeless who live near Rome’s large Termini train station.

While located in Rome's geographical center, three miles east of the Vatican, Sacred Heart is in an “existential periphery” of the city.

“Initially (Pope Francis) said, ‘I don’t want to go to a church in the center of Rome, but on the outskirts,’” the parish's pastor, Fr. Valerio Baresi, a Salesian, told CNA Jan. 20.

“Then he realized we, because we are in the center of Rome – we’re across from Termini station – that we live in the reality of an existential periphery, because here there are numerous poor people, looking to survive near the station.”

Termini is Rome's main railway station, connecting it to Europe and Italy's major cities; it is also a metro station, where the city's two main lines intersect.

Sacred Heart offers special outreach to the diverse populations who arrive at Termini, often living on the peripheries of society. Each Thursday the parish hosts a get-together with games, songs, reading the upcoming Sunday gospel together, as well as a dinner. On Friday, a group of young people bring dinner to the homeless at Termini station.

“It’s not just that we give them something to eat: above all, we create relationships,” explained Fr. Baresi.

The many activities are run by both the Salesian priests at the parish and a group of missionary sisters from Argentina. Together, they work “with the youth” rather than “for the youth” of the parish, forming the young people to be able to enter into the work of service with people from all over the world.

“It’s beautiful to see the young refugees together with the young Italians – mutual enrichment, one learning from the other, one teaching the other,” reflected Fr. Baresi.

Sacred Heart, which serves over 400 refugees every year, also offers Italian classes, education for a middle school diploma, and a driving school, “so that they can find it easier to enter into the world of work.”

During his homily for Mass, Pope Francis preached on Christ as the “lamb of God,” taking on the “weakness” of humanity.

Christ “takes away many sins with love,” preached the Bishop of Rome. He “is full of love, close to the small, close to the poor: he was there among the people.”

The city's bishop also emphasized the profundity of God's forgiveness.

“Maybe we have torment in the heart, darkness in the heart, maybe one feels sad for a sin… but (Jesus) came to take on all the sins … this is the salvation of Jesus.”

Jesus came to bring “peace in the world, but first in the heart,” he said.

“We must grow in faith in Jesus.”

Pope Francis then led the congregation in an Ignatian-style meditation about Sunday’s gospel reading.

Following the Mass, a Ghanaian refugee, Steven, told CNA he appreciates Sacred Heart because “here they have respect for everyone – we are all like family here, we don’t have a difference between refugees or the people who live in Rome.”

Steven met Pope Francis during the pastoral visit, and said that when he asked the Pope to pray for him, he replied, “pray for me too.”

“One thing he said that was very interesting for me,” Steven added, is “he said that no one here can save us – only God will save us.”