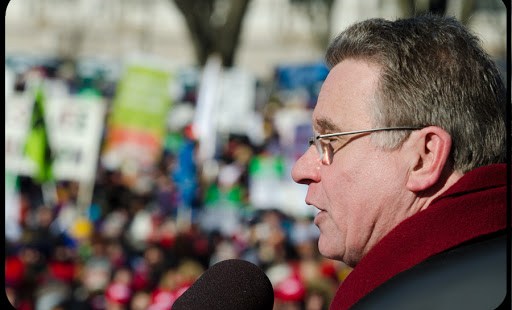 On the 41st anniversary of legalized abortion throughout the U.S., pro-life lawmakers from both political parties voiced hope about the future of the pro-life movement.

Smith, who is both co-chair of the Congressional Pro-Life Caucus and chair of a House subcommittee on international human rights, characterized the pro-life movement as a “human rights struggle based on faith and compassion.”

“This is an injustice that will not stand the test of time,” he said.

“How can you not be hopeful when you see families from all around the country making the sacrifice to come to Washington to support the rights of unborn children?” she said, referencing the annual March for Life.

Held every year on or near the Jan. 22 anniversary of the 1973 Supreme Court ruling that mandated legalized abortion throughout the U.S., the March for Life routinely draws massive crowds consisting primarily of young people from around the nation. An estimated 650,000 people attended the 2013 March for Life.

Blackburn said that while “it's important to remember that lasting change takes time,” the annual march is essential in showing “the continuing vibrancy of the pro-life movement.”

“Too often, Americans seem to regard the pro-life movement an antiquated pursuit mired in the past,” she said, explaining that the march “gathers young people from around the nation to a central place where they can discuss the moral implications of the matter at hand and feel confident they are not alone in their beliefs.”

Rep. Dan Lipinski (D.-Ill.) co-chair of the Congressional Pro-Life Caucus, told CNA that the annual march shows “that we're not just anti-abortion – we are pro-life” and that pro-life advocates “want to support life in every way possible.”

The congressman suggested that “sometimes there's too much of a focus on changing the laws” without addressing larger cultural issues surrounding abortion.

There is a need to change both culture and law, he said, adding that he is “doing all that I can” in Congress, while other efforts are being made on a cultural level.

In these efforts, he explained, it is important to show the American public that “the pro-life movement is bigger than it's been before.”