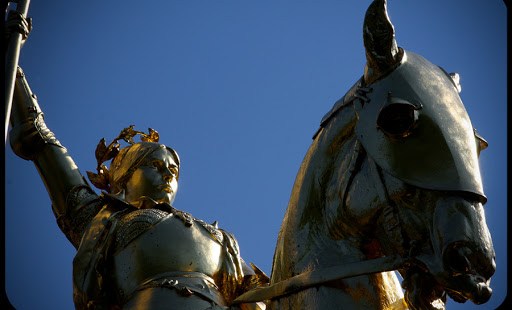 The road to oppression is paved with utopian intentions.

A couple of weeks ago I argued for the inclusion of the mind in the task of loving our enemies, tying that necessity to Christian participation in politics. There really is no such thing as being charitable without being reasonable. Nevertheless, the Church wouldn't recommend a purely rational approach to the common good either. Pope Benedict XVI recommends St. Joan of Arc as an example for Christians who engage in public life. As we'll see below, she's a great model of intelligent action driven by heartfelt motives. In times like these, we could use a renewal of her political brand of holiness. A society made up of heartless thinkers and their thoughtlessly “charitable” collaborators can only become a society of equally culpable guides and followers—both headed for ruin. So this week I'd like to point out a contrary but not contradictory truth about love: while thoughtless love is in the end uncharitable, heartless thinking will be equally irrational.

Some of the most outspokenly “charitable” people I've ever met are at the same time some of the cruelest—like those who are duped into donating to a Catholic “charity” organization I've mentioned, which collects money at Mass only to direct people to the cruel, secular welfare system that subjects the poor and needy to a moral re-education in the arts of career-dependency, birth-control, abortion, and divorce. The churchgoers who give to that charity, while they may give themselves a dose of self-satisfying love, are “loving” the poor thoughtlessly and, in effect, cruelly.

On the other hand the most rational plans of mice and men, by ignoring the human heart, oft go awry. As I wrote last week, nothing could be more starkly rational than the welfare state envisioned by the eugenicists of the Progressive Era. This statist dream of the elites never quite came true, and for the poor it quickly became a nightmare. Progressives thought that the human family could be herded and bred like dumb cattle. They treated the “common good” as a utopian, man-made machine that only needed a little specialized fine-tuning to be completed. But the human person is not as manageable as progressives thought. Whether free or imprisoned in a system that attempts to remove our humanity, human action is motivated by all the impulses of the heart, both fallen and divine. The “unfit” who were excluded from the market by high minimum wage laws did not just disappear from the human gene pool like they were supposed to do. Instead of exterminating all the miseries of life, the progressive agenda maximized them, in part by arranging for a permanently dependent underclass to be put in the impersonal hands of the secular state. The icy progressive rationality that tried to delete poverty as if it were merely a bug in a man-made system was surprisingly unintelligent in human terms.

The Catholic tradition is not so purely rational, and never silences the heartbeat of the Church long enough for the mind to do much thinking without it. In theology, the Church has wrestled over the centuries with all of the seeming contradictions within our faith, never cutting corners to insist (though it would have been much more simple) on grace over nature, justice over mercy, the humanity of Christ over His divinity, or the doctrine of original sin over the sinlessness of Mary. The same goes for the Church's involvement in politics. Even at the high water-mark of Roman Catholic power, the Church never established an official Catholic political order, as much as advocates of the Catholic State long for that final settlement.