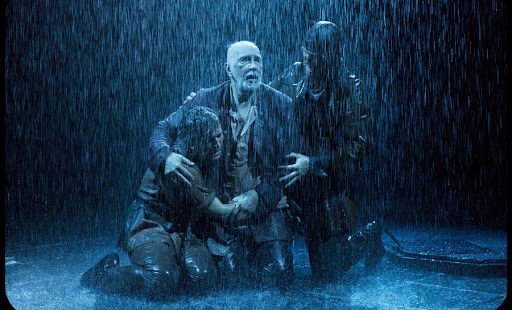 No matter how many times one has read or seen King Lear, arguably the greatest tragedy ever penned, there is always something more to discover — something new to haunt the soul. In this new production at the Brooklyn Academy of Music (better known as BAM), it is veteran stage and screen star Frank Langella’s remarkably fresh rendering of one of the stage’s most envied roles that is currently giving audiences reasons to revisit this classic once again.

At the show’s opening, Lear is set to divide his estate between his three daughters: Goneril, Regan, and Cordelia. In order to determine how he will parse out his land, he offers each of his daughters the opportunity to publicly declare their love and devotion to him. Goneril and Regan attempt to outdo the other in praise and flattery, but when his youngest daughter, Cordelia — who actually does possess a deep and honest love for her father — refuses to show public adulation for Lear, he is enraged. Cordelia is soon thereafter disinherited and married off to the King of France, who is impressed by her integrity.

Regan and Goneril, having given false testimony of their love to their father, are no longer interested in him. Lear — now driven completely mad — is taken to Dover, where he is eventually reconciled with Cordelia. Meanwhile, all is not well, and Goneril and Regan are embroiled in battles to overtake their kingdom. Mix in several love affairs, sword fights, and suicides, and by the play’s end, each of Lear’s daughters, along with Lear himself, are brought to their demise.

Perhaps the greatest challenge for a play of such renown is for a director to provide his own interpretation while still remaining true to the integrity of the original piece. Director Angus Jackson wisely does not try to reinterpret the genius of Shakespeare’s original text. Instead, his goal in this production — in which he succeeds masterfully — is clarity of storytelling and performance.

At the helm of this production is Langella, who at age 76 is giving the performance of a lifetime. In one of the most physically demanding performances I’ve ever witnessed, Langella’s Lear is not only mad in his mind, but also in body and spirit. In this production, he tries to strip himself of his clothing, throws himself in the rain (yes, there’s an actual downpour on the stage), and is dragged across the stage, beaten and battered, as he contributes to his own undoing. At times, one might be tempted to believe that he’s reached his limits and is at the point of no return, incapable of being reasoned with, and then comes along another great soliloquy to remind the audience that while this may be a tormented man, he was once a wise nobleman and his words are still worth our hearing — again and again.

Denis Conway (Gloucester), Max Bennett (Edmund), and Sebastian Armesto (Edgar) all deliver equally solid performances as the dysfunctional — and at times duplicitous — lot that accompany Lear along his journey, while also providing some of the show’s most memorable moments (particularly in the blinding of Gloucester). While Lear’s madness may painfully confront us with human fragility, it is the character of Gloucster in which we are reminded of our capacity for resilience.

Isabella Laughland (Cordelia), Catherine McCormack (Goneril), and Lauren O’Neil (Regan) offer stoic interpretations of Lear’s three daughters. While this initially leaves one desiring more heart and depth, it proves to be a nice balance to Langella’s emotional and even violent rendering of Lear.

Too often with Shakespeare, either the director of the actors attempt to overreach by remaking the show to their own liking. In Act One, The Duke of Albany, Goneril’s husband, warns that “Striving to better, oft we mar what’s well.” Bravo to this finely staged and well acted production for remembering — and heeding — such wisdom.

William Shakespeare’s King Lear is playing a limited rub at the Harvey Theatre at the Brooklyn Academy of Music through February 9, 2014. Directed by Angus Jackson and starring Frank Langella.