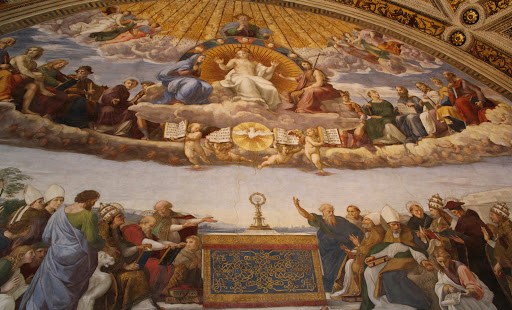 Let us celebrate this Feast of St. Thomas Aquinas, Doctor of the Church, by considering his talents as a dramatist.

Aquinas the Doctor of the Church. Aquinas the bulwark of theological orthodoxy. Aquinas the defender of reason’s harmony with faith. Even Aquinas the poet. These are identifications we may be more or less familiar with. But Aquinas the dramatist–what possible meaning could be attached to this? Has someone recently discovered a long-lost manuscript of a play from the Angelic Doctor’s youth?

Unfortunately, no. And yet I feel justified in referring to St. Thomas as a dramatist. But in order for me to explain why, I need first to take you all the way back to ancient Athens, to the emergence of drama in the Western world. What we know today as theater was invented in Athens in the 6th century B.C. as part of the religious festivals honoring the god Dionysos. In the beginning, performances at these festivals featured a kind of dancing chorus which chanted hymns to the god. But as classical historian Michael Scott explains, the key breakthrough came when one day, for reasons we do not know, an actor stepped out of line, as it were, and began to talk back to the chorus. “That was the origin of drama,” says Scott, “that conversation, that dialogue.” That dialogue, however, while entertaining, was not merely entertaining. It was also in pursuit of the truth: truth about the nature of man and truth man’s relationship to the divine.

This Athenian insight that the pursuit of truth takes dramatic form is also on display in the work of the philosopher, Plato. Plato may be said to have dramatized philosophical inquiry. He didn’t, that is, write treatises, monologues in which he simply said what he thought in his own voice. Rather, Plato crafted dialogues, imaginary conversations starring his revered teacher, Socrates, and one or more of Socrates’ real-life contemporaries. These dialogues of Plato read very much like plays. The philosophical cut-and-thrust can get pretty intense and technical at times, surely, but the dramatic tension at the level of thought, action, and character never completely falls away. The dramatic philosophy of Plato is thus not so very different from the kind of philosophical drama we find in playwrights such as Tom Stoppard (think Jumpers) and Michael Frayn (think Copenhagen).

What both Greek drama and Greek philosophy saw was that the conforming of the mind to reality, which Aquinas takes to be the definition of truth, is made possible by having one’s opinions put to dramatic test. For it is only in such debate that one sees the weaknesses in one’s arguments, the strength of one’s opponent’s views, and the possibilities of wholly new arguments hitherto unimagined. The ancient Greek word for truth, aletheia, from which our site takes its name, literally means “an uncovering.” The quest to uncover the hiddenness of truth can only be undertaken by those willing to enter the dramatic conflict of ideas.

In the Middle Ages, this Greek heritage was embodied in a new form: the public dispute. It became the practice in medieval universities such as the University of Paris for masters to publicly take questions from their students. The public dispute was thus a kind of theater in which the action took place on the stage of the mind–though no doubt it was emotionally compelling, too, for students to see their masters in the dock. Medieval scholars adapted the form of the public dispute to their written works, as we find, for example, in Aquinas’s chef d’oeuvre, the Summa theologiae (“Summary of Theology”).

The Summa theologiae is a difficult work for us to read, at least initially, because its form is so imposingly strange. The massive work is divided into three parts, each part consisting of over a hundred questions, and each questions sub-divided into several articles. And even at the level of the article, the smallest unit of the text, there are difficulties. For example, when Aquinas discusses the nature of happiness, he begins one article with the question: “Does happiness consist in riches?” His reply begins in what may strike us as bizarre fashion, with three arguments defending the claim that happiness consists in riches. What’s more, these arguments are backed by quotations from some pretty hefty sources: the early medieval philosopher and theologian, Boethius, the Greek philosopher Aristotle, not to mention the Book of Ecclesiastes. (Ecclesiastes! Defending happiness as wealth?) Next, Aquinas presents an argument to the contrary, that happiness does not consist in riches, an argument taken, from all people, by the same Boethius quoted earlier.

Only then does Aquinas weigh in with his respondeo, adding his own arguments to the conflict and attempting to resolve the dispute and uncover the truth. But articles in the Summa do not end with Aquinas’s own response. Instead, he ends by taking up the initial arguments with which he disagrees and shows precisely where he thinks they went wrong and even what they may have got partially right. This approach makes sense, however, when we see that it’s a dramatic conflict. Aquinas is putting on a play, a play of ideas in which Boethius is pitted against Boethius, Aristotle against Aristotle, and even the Bible against itself.

And, like Greek drama and Platonic dialogue, the point of the conflict is for us to participate too, to enter the fray with our own ideas in order to put them to the test. For this reason I believe it is fair to celebrate this Feast of St. Thomas Aquinas by hailing him as a dramatist.

The photograph above is of the fresco by Raphael in the Vatican Museums, the so-called "Disputation of the Most Holy Sacrament." St. Thomas Aquinas is depicted in the lower right corner of the fresco. Courtesy Daniel McInerny.