The Difference John Paul II Made in 1989 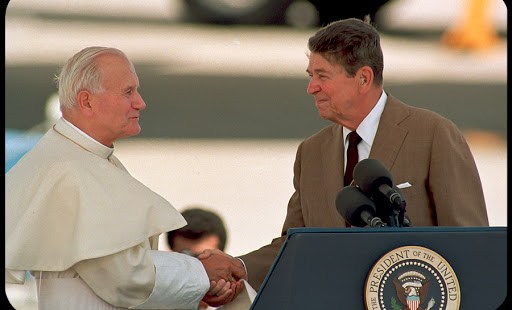 That communism fell when it did, and how it did, cannot be explained without reference to John Paul II.

Twenty-five years ago, on Jan. 27, 1989, a joint statement from the communist government of Poland, the Solidarity trade union, and the Catholic Church announced a national “Roundtable” to discuss the country’s future, including major structural issues of political and economic reform. The Roundtable began the following month; basic agreements were reached in April; partially-free elections, swept by Solidarity candidates, were held in June; and in September, a Solidarity leader, Tadeusz Mazowiecki, became Poland’s first non-communist prime minister since World War II.

Poland was the first of the Warsaw Pact dominos to fall. Its transition accelerated the Revolution of 1989, which was completed in late December 1989 with the swearing-in of Vaclav Havel, a political prisoner earlier in the year, as president of Czechoslovakia.

Over the past quarter-century, various theorists have tried to explain “1989,” typically focusing on the economic incapacities of communist regimes in the post-industrial age, the personality of Soviet leader Mikhail Gorbachev, or some combination of these two factors. No doubt the inability of state-centered, command economies to compete in a high-tech world had something to do with “1989”: so did the fact that Gorbachev, who came from a different generation of Soviet leaders, was unwilling to roll the tanks to maintain Stalin’s external empire. But to leave the analysis with economics and Gorbachev seems to ignore the larger historical question: Why did “1989” not involve massive bloodshed and violence, the usual 20th-century methods of effecting vast social change?

Let me suggest, once more, an answer.

Beginning with the 1992 publication of The Final Revolution, I have been arguing that “1989” was, at bottom, a revolution of conscience—a revolution of the human spirit. The essential character of that moral revolution was captured by Polish dissident Adam Michnik in a historical judgment that was also the ethical foundation of a political program: “People who begin by storming Bastilles end up building their own.” The leaders of “1989,” in other words, were determined that “1989” would not be a re-run of 1789. They wanted to build a future of freedom on a nobler foundation than the French revolutionary assertion of radical personal willfulness— which, after the real Bastille had been stormed, quickly turned into radical mob-led bloody-mindedness.

And from whence did that determination-to-be-different come? It came from many sources. It came from years of serious political reflection by dissidents from the working classes and the central European intelligentsia, much of it carried out in prisons and expressed in underground classics like Michnik’s “Letter from the Gdansk Prison, 1985” and Havel’s magnificent essay, “The Power of the Powerless.” It came from the interaction of these dissidents, their organizations, and the various Helsinki Watch Groups that were established in the North Atlantic world to monitor communist regimes’ adherence to the 1976 Helsinki Accords: a cynical act of diplomatic mendacity by which the Soviet Union and its satellites committed themselves to honor basic human rights, and a folly they would come to bitterly regret. It came from an American president, Ronald Reagan, who was prepared to call political and social evil by its right name, whatever the proponents of quiet diplomacy thought.

And it came from Pope John Paul II, who will be canonized precisely three months after the 25th anniversary of the announcement of the Polish Roundtable.

Moral revolution—a revolution of conscience—had been stirring in central and eastern Europe since 1968, when the Prague Spring was crushed by Soviet tanks. As archbishop of Cracow, the man who would become John Paul II fostered that revolution by bringing together religious and secular dissidents of moral seriousness. Then, as pope, John Paul focused that intensifying but still latent moral energy, somewhat like a laser, into a sharp, bright beam of conscience during his June 1979 pilgrimage to his native Poland, where he helped people of east central Europe rediscover their dignity.

Communism would have fallen, eventually. That it fell when it did, and how it did, cannot be explained without reference to John Paul II and the revolution of conscience he came to embody.