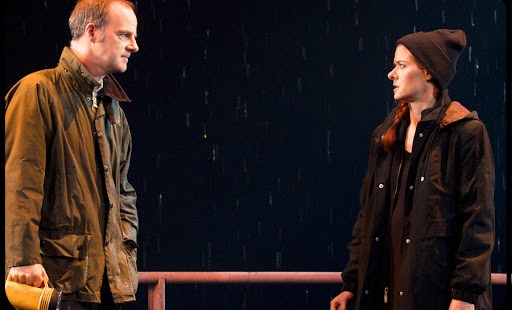 A play for our era of family fragmentation.

Outside Mullingar, the delightful new play by Tony Award winning playwright John Patrick Shanley (Doubt), is a tale of romance, death, and inheritance. And as is standard fare for an Irish fable, its story is full of heart and warmth, but layered with deep emotion and stubborn heritage.

Shanley introduces us to two neighboring Irish clans: the Reilly’s and the Muldoon’s, whose families and their respective cattle farms have peacefully lived alongside one another for generations. Sure, there has been occasional hostility, but these neighborly relations and their shared histories is what has come to define the residents of the rural town of Mullingar.

At show’s opening, the patriarch of the Muldoon family has just been buried and Aoife (played by Dearbhla Molloy), his widow, knows that she’s not long for this world, either. She is, however, at peace with this and prepared to pass on the family farm to her angst-ridden, chain smoking daughter, Rosemary (Debra Messing). In her late thirties, Rosemary is very much single and very much set in her ways. Neither Rosemary nor her mother has much faith in religion, but they do have faith in their farm — the only thing unchanging in a world that has outpaced both of their temperaments.

Next door, a frail but spirited Tony Reilly (Peter Maloney) is preparing for his own death. He, too, is concerned about his estate, but has never made peace with his forty-two year old son, Anthony, who in his view is far more of a Kelly (his deceased wife’s family) than a Reilly. When Tony informs Anthony (Brian F. O’Byrne) that he’s likely to sell the farm to his cousin from America, Tony is faced with losing the only thing in life he’s ever known: his family’s land.

Once Rosemary gets wind of Anthony’s possible disinheritance, she is enraged and informs Tony — in good Irish fashion — that if he doesn’t change his mind, she’ll hasten his already rapid demise. While Rosemary and Anthony have not always been chummy, they both serve as stabilizing factors in each other’s lives. Tony relents, and after his passing, Anthony sets out to make the family farm his own.

After Aoife’s death, Rosemary also takes ownership of her family farm, and the two single farmers share a first in their family histories: owning and running a farm alone without a family to share in it. For three years, they live and farm alongside one another rarely interacting — too obstinate to think of what might come of it if they engaged the other as more than just neighbors. Yet when they do, hostility eventually gives way to romance, and good Irish fortune ensues.

Headlining this production is television star Debra Messing, who makes her Broadway debut in impressive form. As the only non-native Irish cast member, she is very much at home among her fellow cast mates. Her naturally dark auburn hair isn’t even needed as a decoy to convince audience members that she’s Irish — her acting chops do the work for her.

Messing is well paired with Brian F. O’Bryne, who delivers a textured performance of a son in search of his father’s approval and a man whose trying to convince himself that he’s capable of going at it on his own. The chemistry between Messing and O’Bryne is ever present — both in conflict and in courtship — and they are very much each other’s equals, as both neighbors and actors.

Peter Maloney is a quintessential Irishman, who even on his deathbed orders his son to prepare him a pipe. Maloney’s performance is as heartfelt as it is humorous. Dearbhla Molloy is good-natured as the Muldoon matriarch, who may be physically frail but still astute in mind. Under the sharp direction of Doug Hughes, John Patrick Shanley’s story is given worthy treatment. While its themes are at times serious, it’s a show that does not take itself too seriously — an approach that’s suitable of its own Irish sensibilities.

Filled with good humor and delicately peppered with poignant reflections on the meaning of family and farm life, some may be quick to dismiss Outside Mullingar as simplistic or overdone. While this may be a tale that sounds familiar to many of us, in an era of increased family fragmentation that allows for little reflection of our own heritage or patrimony, Outside Mullingar is one that’s worth our reminding.