Damien Jurado: The Voice in the Wilderness 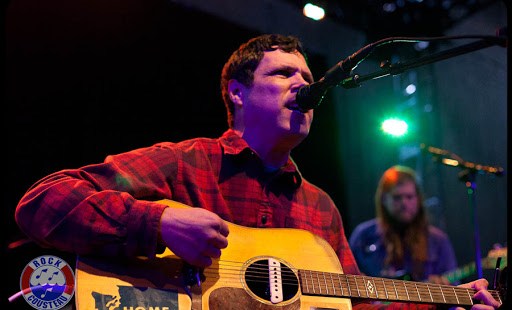 The third rail of rock and roll is…God?

Seattle folk singer Damien Jurado’s 12th studio album, Maraqopa, signaled a major transformation for the dour painter-turned-singer. Unlike previous albums, it was a big, bold expedition – one inspired by a dream Jurado had had about a guy who forsakes his identity, wanders to a strange town called Maraqopa, and “becomes transformed into this brand new creation of a person.”

That explanation – like the lyrics themselves – is beautifully multivalent. But one thing is certain: songs like “Life Away from the Garden,” “This Time Next Year,” and the unreleased B-side “Let Us All In” all explicitly delve into the meaning of sin, faith, and salvation.

Make no mistake: Damien Jurado remains worlds away from your garden variety “Christian singer,” insisting that “music should in no way shape or form be used as a platform for religion.” His lyrics are more catharsis than catechesis, and tend to draw in people like the decidedly ex-Christian Father John Misty of Fleet Foxes, who rambled somewhat incoherently about Jurado’s genius over at Spin Magazine.

Yet, he confesses to a recent blurring of his faith and his music – a process he says mirrors a Johnny Cash or a John Coltrane – crediting a sort of “awakening.”

“With Maraqopa, I think it all sort of came to light, on so many levels, emotionally, mentally and especially spiritually.” he says in one interview.  “I definitely subscribe to the Christian faith, so a lot of that came to the forefront on this newest record, for sure. … But I think it’s just because of this awakening I had, or the transformation I took on a real mental and spiritual level.”

Jurado’s latest album, Brothers and Sisters of the Eternal Son, ventures deeper into the land of Maraqopa, expanding both the sonic and spiritual freedom of the last album. “This new record is sort of a sequel to Maraqopa, which I also did with Richard Swift,” Jurado explains in the album trailer. “It is about a guy who disappears on a search, if you will, for himself – and never goes home.”