Sotomayor and the Rhetoric of the Immigration Debate 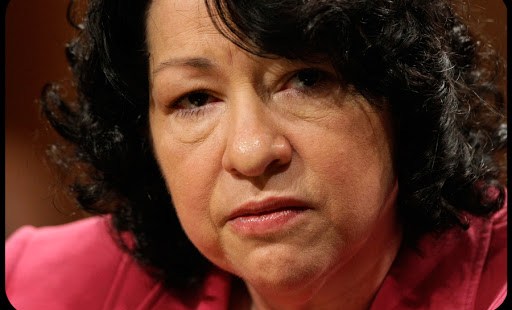 The Supreme Court Justice frames the issue as a matter of respect, laments that immigrants can be made to seem “as something less than worthy human beings.”

During a talk at Yale University, Supreme Court Justice Sonia Sotomayor discussed the story of navigating the unfamiliar waters of the Ivy Leagues and the federal court system – a winding path that took her from the slums of New York City to her present role as a Justice of the Supreme Court of the United States.

In talking about the two worlds she inhabits – one consisting of Washington’s marble-clad halls of power in which her colleagues discuss such things as the latest opera production at the Kennedy Center, another consisting of fleeing from cockroaches in her old apartment in the Bronx – she said, “Sometimes, I do feel I’m not part of either world completely. My life has changed so much that going back, I don’t feel I’m completely part of the conversation.”

But it is precisely these experiences that inform Sotomayor’s views on immigration. When asked about her preference for the term “undocumented immigrants” as opposed to “illegal aliens” (or as is often heard in some circles today, merely “illegals,”) she voiced her belief that calling immigrants – legal or not – “criminals” because of a regulatory problem amounts to an insult.

“I think people then paint those individuals as something less than worthy human beings, and it changes the conversation,” Sotomayor said.

The Justice’s remarks make for an interesting backdrop to the present debate on immigration. Just laws exist not for their own sake, but for the common good and objective principles. Properly understood, the law exists to serve people in the context of a community. When a nation’s immigration laws remain ineffective at addressing the problem of 11 million residents who remain in the shadows, but which nevertheless are employed below the minimum wage and remain subject to all sorts of labor abuses, then it is clear that the law is deficient.

As the nation’s societal composition continues to change, it is worthwhile to think how these immigrants might help to enrich the nation – economically, even, as new markets that can attend to the needs of distinct peoples and cultures begin to open up. As we have seen amongst many Asian and Latin communities, for instance, it is often members of those very communities who, with an entrepreneurial spirit, address those very challenges and needs. When people come to a country that is able to provide the means for better employment and a better future, that opportunity for communal growth should be embraced.

Do words matter? They certainly carry meaning, but moreover, they are backed up by enforcement when codified in law. Is it “illegal” to break a law that is itself evidence of brokenness? Perhaps it is time to renew our focus on addressing that which is broken in order to make society whole.