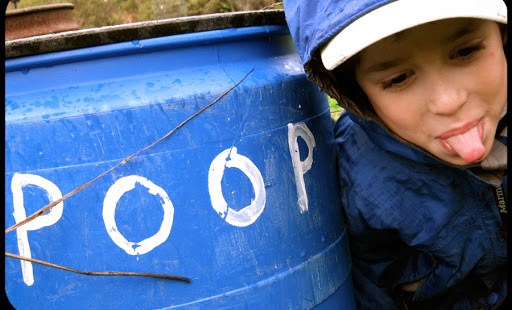 Move over, Dante – you haven’t seen what my family is capable of.

Buzzfeed – that treasure trove of time wasting – has a quiz up called “Which Circle of Hell Will You Go To?”, based on Dante’s Inferno.  Since I am not only a consummate quiz taker, but was also avoiding the deadline for this article, I took it.

Not surprisingly, I got “Gluttony”:

“You have lots of good things going on, and you’re not afraid to enjoy all the pleasures in life. Which is great, except your punishment in hell involves lying on the ground while essentially poop rain falls on you. But hey! It doesn’t hurt (it’s just really gross), and maybe you’ll get used to it. Good job!”

Sounds about right.  However, I would like to humbly suggest that I’m currently living out part of my punishment – as a stay-at-home mother of six young kids, I feel like poop rain is pretty constantly falling down on me.

Do you know that for the last eleven years, we’ve had to buy diapers?  Over a decade of changing other people’s behinds.  And believe me when I say that there have been some truly horrifying, and some truly bizarre things discovered in those diapers.  So, when you put it in that context, wallowing in stinking mud while poop rains down on me isn’t that terrible.

As I passed by my oldest child’s room the other day, I was suddenly assaulted by a stench so strong my eyes started watering.  Gasping for air, I summoned my daughter and asked her what she had in her room.  Was there, perhaps, a six-foot long boa constrictor who had shuffled loose the mortal coil and was putrefying under her bed? (This is not hyperbole – I actually do know what six feet of rotting snake smells like.  It is unpleasant.)  The girl responded with indignation; she insisted that not only were there zero animals, dead or alive, under her bed – there was not even a malodorous hint to the air.  She took a deep breath to drive her point home.  Then she started gagging.

I nodded sagely and left her to tear her room apart until she found the source of the stink.  Several hours later, she discovered a half-eaten clementine,  stuck in a ziplock bag and slowly fermenting into a sort of jailhouse hooch.

I don’t even ask what the substance is that’s smeared all over the windows in the boys’ rooms anymore.  Nope.  I have learned my lesson that some things are best left shrouded in mystery.  Now I simply hand them the Windex and some paper towel.  We need clean windows to see that poop rain a-fallin’.

With winter’s icy claws squeezing the life out of us, we’ve been cooped up in the house for about five centuries.  All the smells and mystery substances and messes have reached critical mass, and I suspect I would sell my soul for a green yard to turn my kids out on.  But green lawns are still a good two months out.

So yeah – that third level of Hell is looking pretty nice right now.   At least I’d get to be outside while the poop rain fell on me, and nobody would expect me to keep the place clean.

Cari Donaldson is the author of Pope Awesome and Other Stories: How I Found God, Had Kids, and Lived to Tell the Tale.  She married her high school sweetheart, had six children with him, and now spends her days homeschooling, writing, and figuring out how to stay one step ahead of her child army. She blogs about faith and family life at clan-donaldson.com.