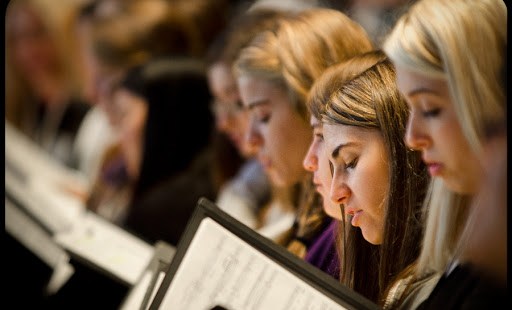 “To recover a sense of our sacred music” is among the top objectives of the Benedict XVI Institute for Sacred Music & Divine Worship.

A recently launched initiative in San Francisco will educate Church musicians about sacred music and train lay ministers for their roles, according to Archbishop Salvatore Cordileone.

“To recover a sense of our sacred music” is among the top objectives of the Benedict XVI Institute for Sacred Music & Divine Worship, the Archbishop of San Francisco told CNA Jan. 25.

“Beauty – as Pope Benedict has taught us – beauty evangelizes, lifts us up to God, so we need to recover that sense of beauty in our liturgical music.”

The institute had been launched at a Jan. 5 vespers service for the Epiphany, at which both the archbishop and the foundation's director, Fr. Samuel Weber, spoke.

The Benedictine priest taught the more than 200 attendants how to chant, and in his interview with CNA the archbishop affirmed that such a recovery of sacred music “really is just trying to do what the Church has asked us to do, at Vatican II and ever since, in all the documents on music and the liturgy, that the people also be well formed in singing the sacred repertoire.”

He alluded to the Vatican II document on the liturgy, “Sacrosanctum Concilium,” which acknowledged Gregorian chant as “specially suited to the Roman liturgy,” thus forming the core of the “sacred repertoire.”

“It doesn’t exclude other forms of music, as the (Vatican's) instructions say, although it says it should be in keeping with the sacred nature of the liturgy,” he explained, adding that the Benedict XVI Institute’s purpose “would be to promote chant, and perhaps to some extent polyphony.”

Contemporary music, too, will be included he said, saying, “this is perhaps a good idea, that musicians understand how to use contemporary music well, because it is very popular, and that will draw people too.”

Archbishop Cordileone said it is important that “musicians doing contemporary-style Church music should understand what is good music – because not all of it is even good musically – but also to understand the theology underlying the lyrics.”

He cited some songs as having “watered-down” or “bad theology,” while holding up songs “straight from Scripture – especially the Psalms” as examples of what can be given as “good formation” in sacred music “which lifts the soul.”

Fr. Weber, the institute’s director, is well-versed in Gregorian chant, but is also known for “updating” chant, producing English and Spanish language music in a chant style.