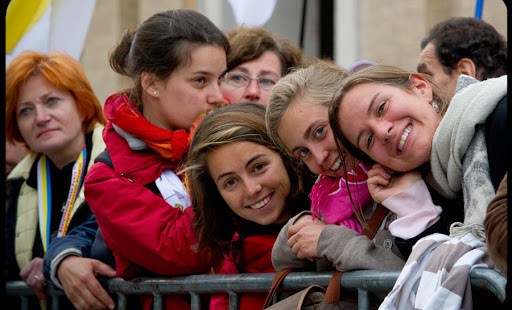 How the latest generation is changing the public face of Catholicism – for the better.

Much has been written about the Millennials, the generation born in the 1990s — or as early as the 1980s and I suppose as late as the new millennium which gives them their name. You can find articles about their political views, their work habits, and their buying trends. You can also find complaints from non-affluent Millennials that these discussions don’t apply to them.

The Millennial Generation is not very religious, and Millennials are not very orthodox even when they are. But at places like Benedictine College, where I work, you meet a hybrid version of them: The Hardcore Catholic Millennial.

They are truly hardcore Catholics. They are also truly Millennials. Their religion does not wipe out their generation’s culture any more than their culture wipes out their religious beliefs.

A more formal study could be made. But observing them up close at a college campus and asking them questions about their future is adding up to a theory I have: Their Millennial traits transform their Catholicism and vice versa such that they are likely to do great things for the Church.

Maybe Millennials see hugs where there are none because Millennials have been hugged a lot. They have been carefully taught that they are special from childhood on. Their good qualities have been appreciated and celebrated; their bad qualities have been excused and dismissed. Social media turbocharges that specialness, allowing each of them to construct an online universe with themselves at the center. It is virtual narcissism that easily becomes actual narcissism.

But hardcore Catholic Millennials have something else: a confidence about their faith that my peers never had. We never felt comfortable when we were different from the culture. Millennials are special, so they have permission to be different.

They don’t just accept their Catholic identity: They brand-manage it. They create Tumblrs and Pinterest Boards filled with Catholic art, Catholic quotes and inspirational gifs. Their Instagram accounts share pictures of churches and statues alongside the pictures of friends and sunsets.

I saw this robust attitude toward Catholic identity when we were doing a video for Benedictine College in a dorm lobby. Unexpectedly, a group of students congregated in the lobby and started praying the rosary. When I was at a hardcore Catholic college in the 1980s, we said the rosary too … in our rooms. I think we would have been too timid to be quite so out in the open with it. We didn’t know our Catholic identity was special.

Many Millennials have lived all their days under supervision. At the college we are well aware of the heavy involvement many of their parents take in their lives. The term “helicopter parents” has been no longer does justice to it: These are “bulldozer parents,” clearing all obstacles in their children’s way.

This can leave a Millennial frozen when the parents inevitably leave the scene. Hardcore Catholic Millennials are no different.
Catholic blogger John Lim wrote about his generation’s tendency to call passivity “discernment.”

“Before we do anything, we must discern,” he said. “This isn’t a false idea, but we’ve taken it to a point where we’re discerning about discerning. It is plaguing our generation and preventing us from truly following God’s will for our lives.”

Another Millennial summed it up for me this way: “For us, adoration and Mass are legitimate excuses to use to get out of doing things.”

So I can see how these can be a problem: Thinking too much about what God wants; going to Mass and adoration too much. But it strike me as a good problem to have.

My generation was always told to think of the consequences of our actions; these people are actually doing it.

A Benedictine College professor told me about a meeting he had in a college conference room. He had neglected to book the room properly, and when he left his meeting he found 85 students crammed into the hallway outside, waiting. They had organized an informal chastity discussion group … and dozens of students showed up.

These are clearly young men and women who want to make good choices. Good for them.

Being constantly supervised doesn’t just make you safety conscious: It makes you group-oriented.

My generation were latchkey children. We went home after school and we got together with other kids if we happened to be home when they called or knocked on the door.

The Millennials grew up together at play-dates, sharing after-school activities and organized sports. The social media paradigm – meeting and chatting in a semi-public forum – is not a new phenomenon to them, but just a different way of doing what they were already doing. Hardcore Catholic Millennials are using these these technologies to connect with God … and introduce others to him.

“They’re on ipads and iPhones before, during and after Mass … praying with the liturgy of hours and the readings,” one Millennial told me. “The apologetics discussions are everywhere, always online.”

If you ask a previous generation of Hardcore Catholics what it means to be Catholic, they might cite politics or personal religious practices. I asked that question of seven different hardcore Catholic Millennials: Every one of them said “Evangelization.”
That strikes me as a better answer.

One tweet from St. Peter’s Square struck me as capturing the spirit of the Hardcore Catholic Millennial: “The long tour of the Popemobile looks like a hug of B16 to all of us present here in the square.”

Of course it was moving to see the Pope’s appreciative gesture … but why does it need to be a hug?

The need to be personally noticed, appreciated and contacted: That is a quintessential Millennial trait.

…. At any rate, as much as Millennials may scare me with some of their traits, Hardcore Catholic Millennials fill me with hope for the Church’s future. I know they are not perfect. They can be superficial and their work ethics need improvement. But along with the bad come some counterbalancing virtues: They insist on authenticity, transparency and sincerity; they are compassionate, curious and open-minded.

They will surprise us with what they accomplish.