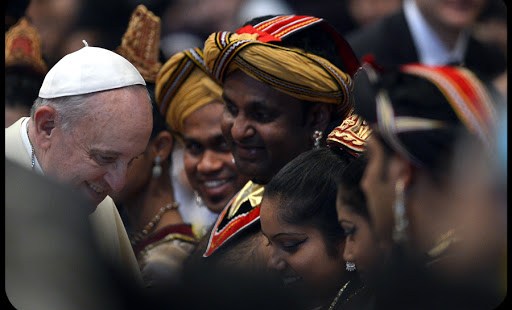 A fascinating new report claims to tell the inside story of the 2005 papal conclave.

Did Pope Francis really intend to take the name John XXIV in homage to the pope who called the Second Vatican Council? In an astounding report for Religion News Service, David Gibson claims that Cardinal Bergoglio told a fellow cardinal what name he would have taken. “John, I would have called myself John, like the Good Pope; I would have been completely inspired by him,” Bergoglio allegedly told Cardinal Francesco Marchisano,

The claim is made in a new book by Italian journalist Gianluca Barile. According to Gibson Pope Francis was nearly elected in the 2005 conclave in which Pope Benedict XVI was finally elected. Gibson claims that in 2005 Cardinal Bergoglio received 40 votes after three rounds of balloting in the Sistine Chapel. He was coming in second to Ratzinger who had 72 votes–only six votes short of the two-thirds margin necessary for election. At that point, Gibson claims, the cardinal from Buenos Aires indicated that his supporters should pull back. Cardinal Ratzinger was then elected pope with 84 votes.

By now we should be getting used to the Vatican gossip mill and the reliability (or not) of Italian journalists. It is impossible to forget the interviews with Pope Francis by the senior Italian journalist and founder of La Repubblica, Eugenio Scalfari. Scalfari, one of Italy’s most respected journalists met with the Pope himself and then went on to write up the interview which caused confusion and misunderstanding around the world. He later admitted that he did not take notes at the meeting with the pope nor did he record the interview. He went on to confess that the words he reported “were not shared by the pope himself.”

Shall we therefore believe Gianluca Barile’s account? I’m ready to take it with a pinch of salt. The secular media are driven by an agenda to portray Pope Francis as a radical reformer who will endorse women priests, change the Catholic Church’s teaching on artificial birth control, give the nod to same sex marriage, loosen up the rules on divorced and remarried Catholics and probably announce his engagement to a beautiful woman and declare that Jesus Christ isn’t really the incarnate second person of the Holy Trinity after all. They have already painted Pope John XXIII as that kind of reformer, and to suggest that Pope Francis really wanted to be called John XXIV is most likely an exaggeration at least if not a total fabrication.

What kind of a reforming pope is Francis? He is a reforming pope inasmuch as he attempts to preach the gospel of Jesus Christ. Like all the popes of the last fifty years, and beyond, Pope Francis will do the best he can to root out corruption in the church, purify the clergy, call the laity to follow Christ more closely and inspire all Catholics to live up to the standards of the gospel. In that respect he will seek to reform the church simply by being faithful to the demands of the gospel. Secular observers should try to understand that the Christian gospel–when faithfully proclaimed and lived out–is always subversive. It is always a reform movement.

Pope Francis preaches the gospel of reform in his own inimitable style. He will bring to the task his own love of the poor, the simplicity of his personal manner of life, his down to earth ability to relate to all people and his passion for the mercy of God to be ministered to human beings lost in darkness and despair of the modern world. His emphasis will be on simplicity, honesty and openness.

When he canonizes Pope John XXIII in April he will also canonize Pope John Paul II. As he does so he will reveal the fact that his choice of the name Francis is one which reflects the strength and grace of both of his great predecessors.

The Rev. Dwight Longenecker is the parish priest of Our Lady of the Rosary in Greenville, South Carolina. His latest book is The Romance of Religion: Fighting for Goodness, Truth and Beauty. Learn more about it at his website, dwightlongenecker.com.