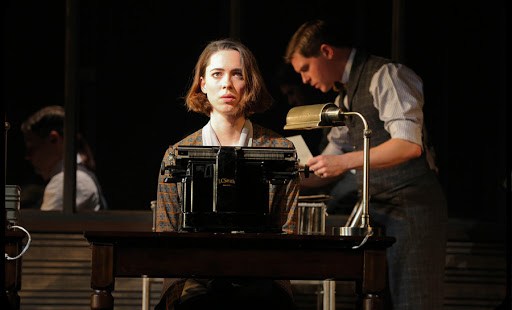 It may be a story of yesteryear, but its time is now.

When faced with the prospect of death, Ruth Snyder responds in the same manner in which she has faced all of her life's events: in protest. The secretarial position at her workplace, her marriage, motherhood, and now her execution — all have been acts of unwillful submission.

Machinal, Sophie Treadwell’s 1928 play, which tells the true story of a New York City housewife, Ruth Snyder, who murders her husband and receives the death penalty for her crime, is currently receiving its first ever revival in a haunting new production by the Roundabout Theatre Company. Told in staccato style dialogue and through stylized movement, Machinal is not exactly a meditation on human freedom and its limits, but rather a portrayal of the havoc it can sometimes wreak.

The seasoned British stage actress Rebeccca Hall makes her Broadway debut in fine form in this performance, and she is devastatingly good as Snyder. On the outside she possesses a simple, elegant beauty. On the inside, she is tormented and undone. Hall strikes the perfect balance between these two extremes and delivers a delicate,  sympathetic portrayal of Snyder, a woman whose constant war with the world around her can never be won.

Michael Cumpsty is Snyder's suave and well polished husband, who passes his evenings reading the paper, discussing the weather, taking calls related to work, and everything else one might expect from this passionate, formulaic marriage. When Snyder encounters her eventual extramarital lover (played by a rugged Morgan Spector) at a city saloon, it's little surprise that she leaps at the opportunity to experience something that offers the daring possibility of excitement and is of her own free choosing.

Yet after Snyder takes a bite out of that apple, her world is turned upside down. She has tasted – and enjoyed – a world previously unknown to her, and one that she is desperate to live in. The killing of her husband is merely an act of kindness to spare him the pain of infidelity and potential divorce, and this will free her from the inescapable ties that bind her. His murder, she believes, is the only true act of freedom that she can complete.

Machinal may be a story of yesteryear, but its time is now. Directed by Lyndsey Turner, this production brilliantly illuminates the darkness of the human heart. Es Devlin's rotating box set design cleverly moves along this production at a fitting pace. Jane Cox's lighting design and Matt Tierney's sound design enhances the drama in restrained and subtle ways.

At the show's end, as Snyder is led from her prison cell to the execution room, she is followed by a priest who recites the various rites for the dying. "Lord, have mercy," he prays as she is strapped into the chair. "Christ, have mercy," we hear, as she breathes her final breaths on this earth. "Lord, have mercy," the priest prays a final prayer for the repose of her soul and all who are present sit stunned with fear and trembling. Ruth Snyder has finally escaped the machine… though the journey that awaits her is likely to be far more agonizing.

Machinal is playing a limited run through March 2nd at the American Airlines Theatre in New York City. Written by Sophie Treadwell and directed by Lyndsey Turner. Starring Rebecca Hall.