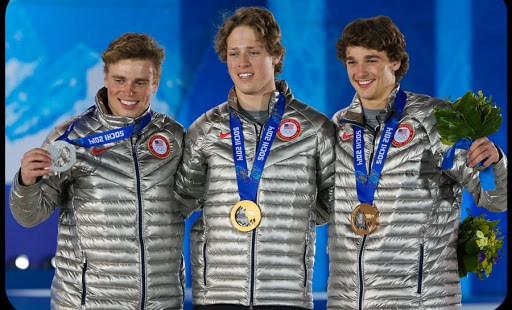 The medals help the U.S. remain near the top in overall medal counts.

Earlier today, the U.S. team swept all the medals for slopestyle skiing at the Sochi winter Olympics.

"I am shocked," said 22 year old Joss Christensen, who won gold, according to the Wall Street Journal. "America, we did it."

Amazingly, Christensen only made it on the U.S. Olympic team as a discretionary spot. "I just wanted to show everyone that they made a good choice," he said.

This is only the third time that the U.S. has swept all the medals for a winter Olympics event, the other two instances being in the 2002 men's snowboard halfpipe and in the 1956 men's figure skating.

The three medals bring the U.S.'s overall medal count to 12 (as of the writing of this article), tied with the Netherlands and just behind Norway's 13. Nonetheless, the U.S. is currently ranked fifth in medal rankings, since only four of its medals are gold. Germany leads the weighted rankings with 6 gold medals. Current medal counts can be viewed here.

At the last winter Olympics in Vancouver in 2010, the U.S. won the highest number of total medals, 37, but was ranked 3rd behind Canada and Germany due to a low number of gold medals.

Other Olympic coverage from Aleteia:

How the Church Fathers Found God in the Olympics

The Christian Roots of the Olympics