Language and the University Professor 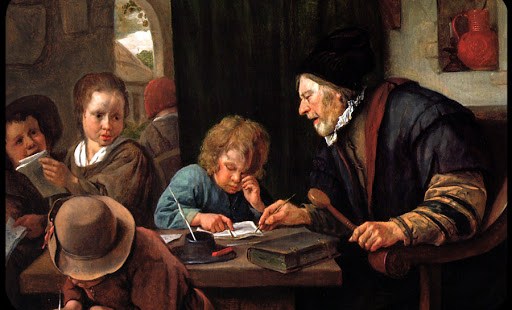 An open letter to the teacher of the humanities.

I am writing this letter because, during my time at the University, I came to understand something of your labors. You are a tired, bitter pilgrim. Having created the gorgon that will turn us all to stone, you strive bravely to look everywhere but in the direction of its eyes.

You have discovered the limitations of language. You understand how words defer meaning, how it is impossible for the symbol, the word, to escape its own system and directly represent the world outside itself. We have learned that words carry meaning not because they can replicate “the other” which they name, but because of their relation to other words. Thus, no set of words will have a contained or certain meaning.

You have discovered that it is the same with beauty; we glimpse, we long, but we cannot lay our finger on what it is we see and desire. In your youth, a lovely poem or those stars shivering in the void might have pierced your heart, and you would have kept the memory of them. But now you are bitter that beauty eludes your grasp, and you take revenge on it by pulling it all to pieces with your army of literary critics and their arsenal of theories.

And so rather than endure the ache, you have denied the beauty of the world and denied the world’s existence as the Greek philosophers thought it existed—as something solid outside our heads with which our hands and our words may connect.

Like Narcissus staring into the pool, you refuse to admit the presence of anything—pondweed, water snakes–below the surface, inaccessible. You see only your own image. For you the world exists only insofar as we construct it through the symbols our community has invested with meaning. Reality, you tell your students, has no objective qualities and is just raw material for the rhetorician, the historian, the artist.

Now you are no longer Narcissus; you are the magician standing before the pool, by your powers of language and vision moving the waters, blending light and shadow to create new forms, shifting the center to the edges and embracing the margins into the center.

As Andrea Lunsford says, we write, create, and speak with a view of “knowledge as always contextually bound, as always socially constructed.” We create truth through symbols used in community. Situation is the name for something we rope off and shape by tongue and emotion. These are the things you daily tell your students.

But you are giving your students ashes, only the dust of gems. What you are saying is that there is nothing to see. You have changed the word “reality” so that it means “nonreality,” chaos; the unknowable outer darkness. This is because nonreality frightens you less than a reality that looms over your head like an unshapeable mountain.