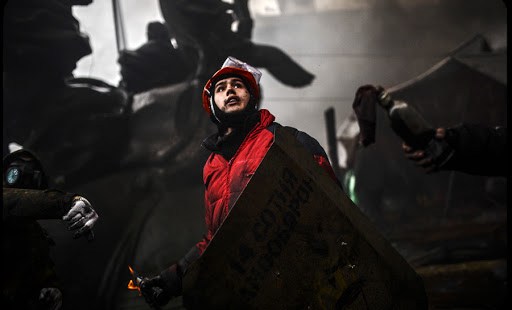 Russia’s diplomatic rhetoric has escalated together with the violence in Kiev as the EU and the US take measures to defuse the situation.

Russian officials raised objections on Thursday to the possibility of sanctions by the United States and European Union member states on Ukraine following the escalation of violence in Kiev.

“How can you expect that your services will be in demand when the parallel threat of sanctions makes everything very similar to blackmail?” said Lavrov while on visit to Iraq.

Russia’s tone concerning Western diplomacy in Ukraine has escalated along with the death toll from the manifestations in Kiev. Approximately 50 people have died in the conflict as of Thursday, with casualties being reported by both protestors and members of the security services.

Lavrov’s comments came the day after an announcement by US officials that 20 Ukrainian civil and political leaders would be subject to a travel ban as a result of their role in initiating the militaristic crackdown on the Kiev demonstrators. Meanwhile, in Brussels, foreign secretaries from across the EU have convened to draw up similar sanctions, as well as a possible weapons trade embargo. According to Belgian Foreign Minister Didier Reynders, travel bans and the freezing of assets have been considered as possibilities.

But even as EU officials engage in talks with Ukrainian President Viktor Yanukovych to attempt to forge a truce, Russian Prime Minister Dmitri Medvedev urged the Ukrainian government to restore order and not to acquiesce to Western demands.

“We will seek to do everything to fulfill the pledges which we gave to them,” stated Medvedev in remarks transcribed by his office, referring to Russia’s pledge of $15 billion in loans to help stabilize Ukrainian finances, “but at the same time, it’s necessary that the partners are themselves in shape, and that the authorities that are working in Ukraine are legitimate and effective, so that people don’t wipe their feet on them like a doormat.”