American Bans on Same-Sex Marriage Do Not Exist 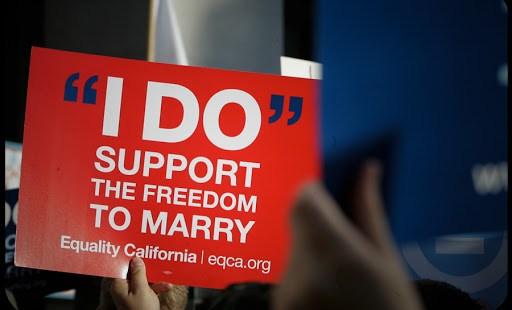 So stop speaking as though they do.

In my home state of Indiana, legislators are currently debating a potential amendment to the state constitution.

Section 2 of the House Joint Resolution No. 3 (formerly HJR-6) suggested (but no longer fully suggests, as the second sentence was voted down by the House earlier this 2014) amending Article 1, Section 38 of Indiana’s Constitution to read as follows:

As media sources statewide have covered the legislative proceedings, I have been surprised to encounter so often the claim that Indiana presently “bans” or “prohibits” same-sex marriage.

I am surprised because in no state of the Union does a ban or prohibition of same-sex marriage exist. This is true no matter where one stands in the marriage debates and no matter how one understands marriage.

The Oxford English Dictionary features several entries for the word “ban” that are relevant to this discussion.

One is: “A formal and authoritative prohibition; a prohibitory command or edict, an interdict.”

Another is: “A proclamation issued against any one by the civil power; sentence of outlawry.”

A third is: “Practical denunciation, prohibition, or outlawry, not formally pronounced, as that of society or public opinion.”
If public opinion polls are to be believed, then not even bans in the third sense exist in America today.

Thus, on the  conjugal view, marriage between two persons of the same sex—regardless of those persons’ intentions, sexual attractions or desires—is not possible. Indiana is not “banning” same-sex marriages in not recognizing same-sex relationships as “marriages.” It is simply refusing to equate X and not-X.

On the revisionist view, marriage is “the name that society gives to the relationship that matters most between two adults,” as one federal judge put it in 2011. It is “a couple’s choice to live with each other, to remain committed to one another, and to form a household based on their own feelings about one another, and their agreement to join in an economic partnership and support one another in terms of the material needs of life,” as Harvard historian Nancy Cott testified in 2010 in opposition to California’s Proposition 8. Other revisionist definitions are very similar.

Thus, on the revisionist view, same-sex couples are able to form marriages, and do so rather frequently: Marriage is either a choice or a label. The present legal and juridical debates over how marriage is publicly defined is, therefore, about whether certain jurisdictions will publicly and legally recognize (affirm as really being) marriages between two persons of the same sex.

But if this is the case, it is apparent that no jurisdiction presentlybans same-sex marriages; in no jurisdiction are they criminalized or illegal; they cannot be banned at all. On revisionism, marriage (let alone same-sex marriage) is either a choice or a label, and nowhere in America are (same-sex) couples prohibited or banned from making this choice or invoking this label. Those couples can even solemnize or religiously affirm their unions by being blessed in whatever church will bless their union.

Talk of “bans” on same-sex marriage indicates a fundamentally flawed grasp on what is really being argued, by anyone, in the debate. The question before various courts and state legislatures is not whether to lift bans or abolish prohibition on same-sex marriages. The question is whether every jurisdiction must, on the conjugal view, equate marriages with same-sex relationships; or, on the revisionist view, legally celebrate and recognize marriages that already exist. But for neither camp is any present legal or juridical battle about lifting a ban on same-sex marriage. It couldn’t be, because no such bans exist.