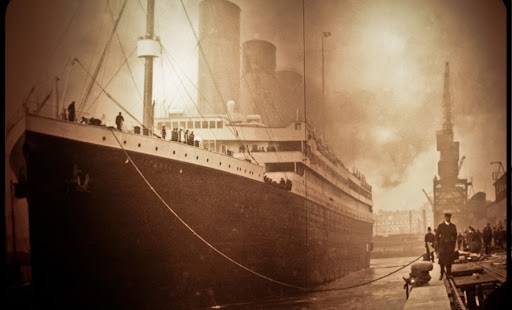 In 1997, when Titanic opened on Broadway, it received mixed reviews and was largely overshadowed by the Academy Award winning film of the same name that was also released that year. Yet despite some criticism, the show went on to win Best Musical and developed a cult following that has become a favorite for chorale groups and regional theatres throughout the country. With this momentum behind it, Titanic returned to New York this week for a star-studded one night only production at New York’s Avery Fisher Hall.

Produced by Manhattan Concert Productions, this performance reunited over twenty of its original cast members — along with twenty new ones and an ensemble of over 240 choral members — for an evening that was just as grand and lavish as the famed ship they were singing about. Whereas the movie focuses chiefly on the romance between two of the ship’s passengers, the musical introduces us to a wide array of over twenty passengers and workers on the ship — some historical, like the Strausses and the Astors, and others fictional — and how, despite class divisions, their fates all become intertwined and leveled when the possibility of the ship’s sinking becomes a reality. Indeed, what is special about this tale of the Titanic is how selfishness can give way to the possibility of solidarity.

Reprising their original roles as the trio responsible for “the largest moving object in the world” were Michael Cerveris as architect Thomas Andrews, John Cunningham as Captain Smith, and David Garrison as Bruce Ismay, Director of the White Star Lines. These three men are central to the show’s narrative, first in their efforts to make the maiden voyage from Southampton, UK to New York in record time, and then later in the responsibility that each of the men feel for the ship’s demise.

Yet while the show is largely built around this trio, we are offered a glimpse at the wide cross section of society on board the boat. Frederick Barrett (played by Brian d’Arcy James), who works in the ship’s coal room, is so inspired by the beauty that he’s witnessing at sea that he sends a telegraph home to Germany proposing to his girlfriend — a promise he’s never able to make good on. Edgar Beane (played by John Jellison) is a hardware store owner from Indiana who has arranged for him and his wife, Alice (played by Michele Ragusa), to enjoy the trip of their lifetimes, only to discover that once Alice gets a taste of how the other half lives, she comes to resent her own status in life and her husband for lacking the ambition necessary for them to move from second to first class on the social ladder. Isidor and Ida Straus (played by Ron Raines and Alma Cuervo) own Macy’s department store, and after forty years of marriage, she refuses to get in the lifeboats and leave his side when the ship goes down. These are the souls that were lost on Titanic, and yet theirs are the stories that live on with us today, thanks in large part to the beautiful book written for the show by the late Peter Stone.

Director Don Stephenson (an original Broadway cast member from the 1997 production) captures all the opulence and majesty that this show has to offer. Kevin Stites, the show’s musical director, is a careful steward of Maury Yeston’s sumptuous score, and by the end of the show’s opening number — which is surely one of the greatest musical openers of all time — the sell-out crowd erupted in a roaring applause that lasted well over a full minute.
This, however, is not much of a surprise, as it’s the show’s music that has given life to this production for almost two decades now, as it gently weaves together large-sounding ensemble numbers — such as the forever haunting, “We’ll Meet Tomorrow” — with delicate duets like “Still” and “The Proposal,” all of which were performed to perfection by the almost thirty-member New York City Chamber Orchestra.

“In every age, mankind attempts  to fabricate great works,  at once magnificent  and impossible…” sings the architect in the show’s opening (and closing) lines. While the dream of Titanic was never fully realized, this magnificent production proves that Titanic is both a story for the ages and the present. Memory eternal, indeed.