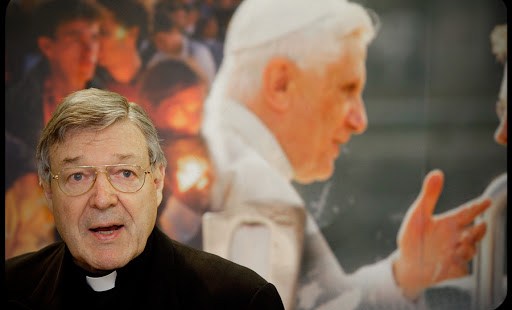 Oxford educated and a former footballer, it’ll be hard for anyone to push Cardinal Pell around as he cleans up the Vatican’s finances.

Pope Francis has appointed Cardinal George Pell of Sydney, Australia to be the head of a new department in the Vatican to oversee its finances.

The new appointment comes after a year or so of the Vatican undergoing a major evaluation of its finances and procedures after evidence was discovered of money laundering and other mismanagement.

The new Secretariat for the Economy, as the new department will be called, “will have authority over all economic and administrative activities within the Holy See and the Vatican City State,” according to the Vatican announcement. WIth Cardinal Pell as the prefect, the Secretariat will have a fifteen member Council for the Economy made up of eight Cardinals or bishops and seven laypeople. No other members have been announced.

Was Cardinal Pell a good choice, and will he be able to clean up the Vatican’s finances?

“Pope Francis could not have picked a better man for the job,” says Director of Research at the Acton Institute and Australian-born Samuel Gregg. “This appointment will certainly be a loss for the Church in Sydney and Australia more widely. […] But the gain will be the Holy See’s and therefore that of the universal Church.”

“In the first place, while he knows the Curia and has been a member of, and consultant to, several Vatican congregations and councils for many years, Cardinal Pell is not ‘of’ the Curia. Nor has he been shy about expressing his frustrations with the way some of the organizations affiliated with the Holy See operate.

“Second, besides being a formidable intellectual in his own right, Pell brings a track-record of having addressed many of the organizational problems that were facing two very large Australian archdioceses when he was appointed as their shepherd. In that sense, he has an excellent reputation as not just an administrator, but as a reforming administrator who understands budgets, finance, accounting and, above all, economics.

“Third, in his time as the head of the archdiocese of Melbourne and then of Sydney (the latter city being the financial hub for much of South-East Asia and Oceania), Cardinal Pell has made ample use of doctrinally-solid and very bright lay people with genuine expertise in their respective fields of endeavor. There’s not a trace of clericalism about the man.

“Fourth, the Cardinal has no illusions about the, shall we say, rather lax attitudes towards issues of financial propriety that prevail throughout large swathes of Italian political and economic culture, attitudes that have permeated certain segments of the Church in Rome and Italy more generally.

“Fifth, the man doesn’t lack for personal courage, and isn’t going to be afraid to make the hard decisions that will be needed to bring order to the Vatican’s rather chaotic set of financial arrangements.”

Founder and Editor of Ignatius Press Fr. Joseph Fessio points to Cardinal Pell’s unusual background as both a jock and an academic as good reason to think he’ll get the job done. “He was signed to play professional football – ’Australian Rules’ which is a cross between American football and rugby, but they don’t wear much protection. His father was a professional boxing champion. And he got his doctorate at Oxford on the subject of one of the greatest English churchmen: Cardinal Reginald Pole. All of which is to say, in summary: he’s tough and he’s smart.”

Fr. Joseph Fessio is a Catholic priest of the Jesuit order and the founder and editor of Ignatius Press. He was the founding provost of Ave Maria University until March 2007.

Dr. Samuel Gregg is Director of Research at the Acton Institute. He has written and spoken extensively on questions of political economy, economic history, ethics in finance, and natural law theory.

Fr. C. John McCloskey is a Church historian and Research Fellow at the Faith and Reason Institute in Washington DC. His personal website is http://www.frmccloskey.com.