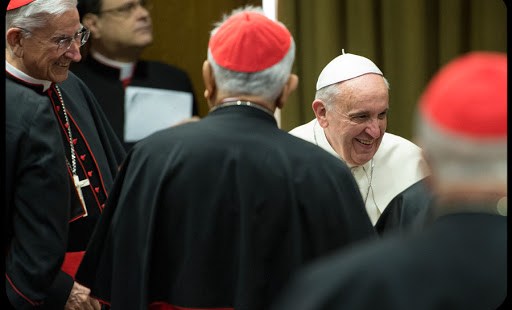 A pope for the third millennium.

Is Pope Francis an Evangelical Catholic? First, we have to define our terms: “evangelical” in its simplest form refers to the “good news,” which is the definition of the word evangelos. The authors of the Gospels are called “evangelists” because they have recorded the “good news” of Jesus Christ, and Mark’s Gospel begins with the words, “The beginning of the good news about Jesus Christ, the Son of God.”

However, the word “Evangelical” also refers to Protestants who hold to a conservative (and often anti-Catholic) understanding of the Christian faith. Evangelical Protestants are known for their simple devotion to Jesus Christ, their zeal for spreading the Gospel, and their joy in communicating the basic message of Christianity to the world.

Evangelical Catholicism is “more Christianity,” not just “mere Christianity.” It brings together the beauties of traditional Catholic worship with a historic understanding of the faith. It is rooted in authentic Biblical scholarship, enlivened by a relevant social message and active ministry in the community.

Bishop Tony Palmer stated in his speech to the Evangelical leaders in Texas that he “wanted it all” – he wanted to affirm the fullness of the Catholic faith, but he also wanted the fiery zeal of the charismatics, the sound Biblical understandings of the “Bible believers,” and the love for sharing the Gospel of the Evangelicals. He asked the gathered Pentecostals, “Don’t you want more of Jesus? Don’t you want it all?”

I understand Tony Palmer because I made the same journey. After being brought up in an American Evangelical home, I searched for the historic church and became an Anglican. That step brought me closer to Catholicism, and I eventually took the step to be received into the full communion of the Catholic Church. In doing so, I affirmed all the fullness of the faith in the Catholic Church, and affirmed all the good things in the Evangelical and Anglican traditions at the same time. I did not deny the good things from my Evangelical and Anglican experience, but in becoming a Catholic, I affirmed even more.

Evangelical Catholicism draws together three major streams of contemporary church life: the Biblical, the charismatic, and the liturgical. These may be seen to represent the mind, the spirit, and the body. In Evangelical Catholicism, the intellectual pursuits of theology and Scriptural scholarship are balanced by the fervent devotion and spirituality of the charismatics. These two are then balanced and brought to a deeper level of human experience by the stability of the liturgy. Likewise, the liturgy is deepened by strong, sound preaching and enlivened by prayer and worship in the Spirit.

These three strands of our Christian experience are all vitally necessary if we are to live the fullness of the Christian faith. Our heads, our hearts, and our bodies need to be engaged with our faith. We need to think, feel and act in the world to be fully alive in Christ.

These three traits are seen in the ministry of Pope Francis. His life is rooted in the liturgy and prayer of the Church, but it is also grounded in theology and Scripture. These two are lived out in his vibrant public ministry – proclaiming a radical Gospel and living out the message of the good news of God’s love in a darkened and needy world.

Fr. Dwight Longeneckeris the author of More Christianity: Finding the Fullness of the Christian Faith in the Catholic Church. Visit his blog, browse his books, and be in touch at dwightlongenecker.com.