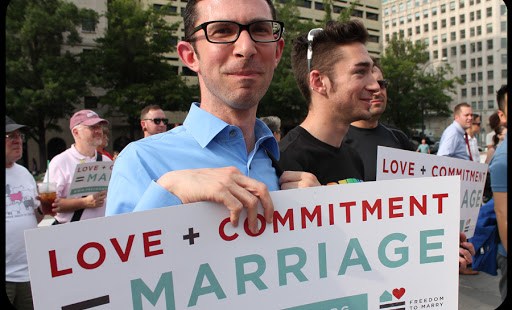 But gay marriage licenses will not be issued during the appeals process.

Federal judge Orlando Garcia struck down a traditional marriage law in Texas, saying that it was unconstitutional.

“Today’s court decision is not made in defiance of the great people of Texas or the Texas Legislature, but in compliance with the U.S. Constitution and Supreme Court precedent,” he said in his order, according to Dallas News. “Without a rational relation to a legitimate governmental purpose, state-imposed inequality can find no refuge in our U.S. Constitution.”

Traditional marriage defender Ryan Anderson strongly disagreed with the rulings. "These rulings claim that the equal protection of the law requires the redefinition of marriage," he wrote in a blog post for the Heritage Foundation. "It does not. State laws that reflect the truth about marriage should be ruled constitutional."

The Catholic Church has always taught that marriage is the exclusive, life-long union of one man and one woman, existing for the good of the spouses and the procreation and education of children. In 2003, the Congregation for the Doctrine of Faith issued a document answering whether Catholics could support legal same sex unions. It concluded:

"The Church teaches that respect for homosexual persons cannot lead in any way to approval of homosexual behaviour or to legal recognition of homosexual unions. The common good requires that laws recognize, promote and protect marriage as the basis of the family, the primary unit of society. Legal recognition of homosexual unions or placing them on the same level as marriage would mean not only the approval of deviant behaviour, with the consequence of making it a model in present-day society, but would also obscure basic values which belong to the common inheritance of humanity. The Church cannot fail to defend these values, for the good of men and women and for the good of society itself."