Francis is the Boost the Church Needs, says 107-Year-Old Nun 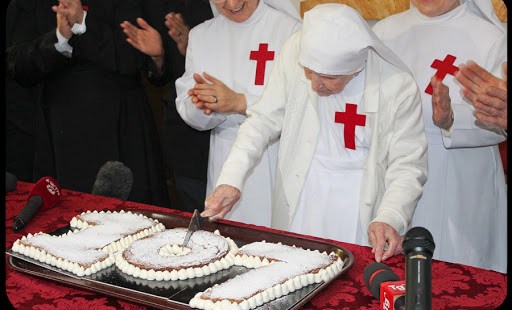 Elderly Sister shares her thoughts on the papacy.

A religious sister who celebrated her 107th birthday at daily Mass with Pope Francis Feb. 20 believes that the Holy Father is a gift to the Church.

“If God wanted us to have Pope Francis, it’s because it was already in his eternal mind,” Sister Candida Bellotti said in statements to CNA. “He is the right person for our time, and we need to respect him because it is God’s will.”

The religious sister, who is believed to be the oldest nun in the world, was too emotional to speak with the pontiff after Mass at St. Martha’s Residence at the Vatican. However, she said that she was filled with joy and continued celebrating with her family, the Camillian Order, at its headquarters in Rome, where members had made a huge birthday cake for her.

“True happiness is appreciating the moment as God gives it to us,” Sister Bellotti reflected. “What we really need in life is to give thanks to God for what he gives us. Because that is the only thing that will make man happy. Man needs to accept each moment that comes and say ‘thank you’.”

“We need to accept the good that we find,” she added. “Sometimes we seek after good things and we don’t find them, but that is the very secret, to seek what is good and avoid what is bad. We need to have the grace and the intelligence to know how to choose between good and evil.”

Sister Bellotti is a member of the Congregation of the Ministers of the Sick of St. Camillus de Lellis. She was born in 1907 in Quinzano in the Italian province of Verona, during the pontificate of St. Pius X. She has spent her life serving the sick at hospitals throughout Italy and currently lives in Luca, where she spends her days in prayer.

In more than a century of life, the 107-year-old sister has survived two world wars and has witnessed numerous developments that have changed history. She attributes all of humanity’s advances to God.

Sister Bellotti felt God’s call to a vocation at the age of 16 and entered the convent when she was 22. She has been convinced since then that Christ called her from all of eternity.

“Never in my entire life have I thought for one minute that perhaps I made a mistake,” she explained. “Never! I am happy, secure and committed to improving my life thanks be to God.”

“My entire life has been beautiful,” she continued. “The saddest and at the same time happiest memory of my life is when I left my family to join the convent. It was something I didn’t want, but accepted and loved. But it filled me completely.”