Just Who is the U.S. Supporting in Ukraine? 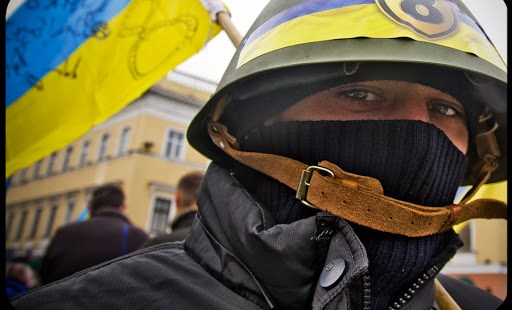 The Russians call members of “the Maidan” fascists and anti-semites. Do we have reason to think otherwise?

In a speech today to the United Nations Human Rights Council, Russia’s foreign minister Sergey V. Lavrov said that Russian troops had entered Crimea over the weekend to protect ethnic Russians from attacks by “ultranationalists.” He was referring to “the Maidan,” the revolutionaries who on February 23 forced Viktor F. Yanukovych from the presidency of Ukraine. The Maidan movement takes its name from Independence Square in Kiev. It was formed late last year seeking to bring Ukraine into closer relationship with the European Union and more generally with the democratic culture of human rights in the West.

The Russians and their sympathizers in eastern Ukraine and Crimea have taken to calling the Maidan fascists, Nazis, anti-semites. Is there any justification for this? There is some reason for concern. As Amelia Glaser observes in Tablet, a Jewish news magazine: “The participation in the current uprising of the “Pravyi sektor” (Right Sector) and “Svoboda” (Freedom) parties, which have historically aligned themselves with other neofascist groups in Europe, has understandably raised concern internationally, especially among Jews.”

Further concern was raised when one of the first acts of the new interim parliament was to overturn a 2012 law that made Russian a second national language. The decision, says Glaser, was “an act of further separation from Russia, culturally and politically.” But Ukrainian nationalists were not all of one mind on the issue. Writes Glaser: “To the credit of the Ukrainian people, there were immediate protests. In Lviv, a stronghold of Ukrainian national sentiments and Ukrainian language activism, residents came out en masse for a day of “Russian language” in solidarity for their Russian speaking compatriots to the East.”

Glaser concludes that “Racist nationalists are not determining the direction of the Maidan movement.” She in fact  lauds the way in which different ethnic groups have worked together to resist Russian hegemony. One contender for the permanent presidency of Ukraine, she points is, is Vitaly Klitchschko, a former boxer whom right-wing bloggers have long attempted to prove is Jewish.

There is evidence, too, that Christian leaders are wielding a positive influence upon the Maidan. In today’s National Review Online, George Weigel argues that “the religious dimension of the entire Maidan movement has been sadly ignored by much of the Western media.” Weigel continues:

“The Independence Square chapel that was burnt down during the Yanukovych regime’s lethal assault on the Maidan last month has been rebuilt. When 30,000 people gathered on Independence Square on March 2, the day’s activities began with prayer, and as various people were making speeches to the crowd, devotees of Our Lady of Fatima were circulating through the square, passing out inexpensive rosaries. The Ukrainian Orthodox Church-Moscow Patriarchate remains divided, and its concerns tend to mute some of the public statements of the national council of churches; but there is clear anti-Putin sentiment in these quarters, which is one important factor in an appreciable increase in the ecumenical generosity and solidarity that began to surface three months ago when the Maidan movement first emerged.”

There is thus reason to believe that the Maidan movement, albeit not perhaps completely angelic, is worth the support of Western diplomatic and economic pressure. But even with that support, whether the Maidan can survive Putin’s invasion and the ethnic tensions with eastern Ukraine is another question entirely.