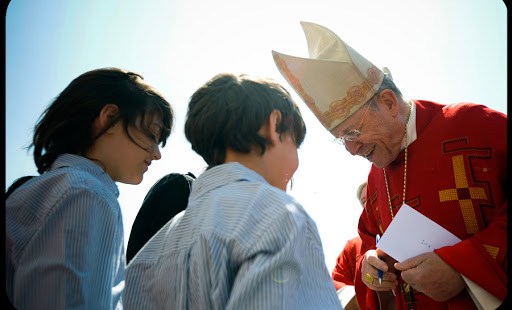 “This discretion is not an easy compromise between the extremes of rigorism and laxity, but, as is every virtue, a perfection between these extremes.”

In a two-hour address to a consistory on the family last month, Cardinal Walter Kasper discussed marriage and family life, devoting the last section to “the problem of the divorced and remarried.”

The final of the five sections has garnered much attention in the press. In that portion he asked, “is it not perhaps an exploitation of the person” when a person who has been divorced and remarried is excluded from receiving Communion, and suggests that for “the smaller segment of the divorced and remarried,” perhaps they could be admitted to “the sacrament of penance, and then of Communion.”

The president emeritus of the Pontifical Council for Promoting Christian Unity spoke at the extraordinary consistory on the family Feb. 20, addressing some 150 cardinals, and Pope Francis.

The Holy See press officer, Fr. Federico Lombardi, had said the address would not be released, as it was a “starting point” of discussion on marriage and the family, and not a final word.
But the full text of Cardinal Kasper’s talk was published by Italian daily Il Foglio March 1, under the title of “The Bible, eros, and family. Creation excludes absolutely the theories of gender. Man and woman are joined together and are invited to become a family unit, to social virtue, to the search for felicity.”
The address discussed the theology of marriage, and was intended to serve as the basis of a discussion on marriage and family life.

Cardinal Kasper began by stressing that “individualism and consumerism” put the “traditional culture of the family” in jeopardy, and therefore the number of those who “fail in realizing their project of life has dramatically increased.”

Despite this, he said, “our position today cannot be that of a liberal adaptation to the status quo, but a radical position that traces back to our origins, that is, to the Gospel.”

In the order of creation, he noted that marriage and the family have “been widely appreciated by all cultures in the history of humanity. It is defended as a community of life between a man and a woman, together with their children.”

Cardinal Kasper denied, without referring directly to them, secular ideologies on gender and sexuality, explaining that “becoming a man or a woman is not a matter of one’s personal choice, as recent opinions maintain.”

As an image of God, human love is beautiful, yet is not divine, he said. Thus there is a problem when a person “deifies” their spouse, setting expectations so high that they cannot be met; this, he said, is a reason why “many marriages fail.”

Touching on the ordering of marriage to children, Cardinal Kasper said the family has “a social and political task,” and is in fact the “fundamental model” for the state, since the family precedes it, both in time and in precedence.

Speaking on structural sin and family life, he said we cannot have “an unrealistic and romantic idea,” but we rather have to “see the tough realities and take part in the sadness, worries and tears of many families.”

At the same time, we should be “bearers of hope” more than “prophets of misfortune,” offering consolation and encouraging families to persevere through their struggles.

Cardinal Kasper then turned to the family in the Christian order of redemption, drawing upon Christ’s words calling the scribes and Pharisees to consider not the Mosaic law, which made concessions to “the hardness of your hearts,” but to God’s original plan for creation.