The Papal Interview is Back! 6 Key Quotes from the Latest Chat with Pope Francis 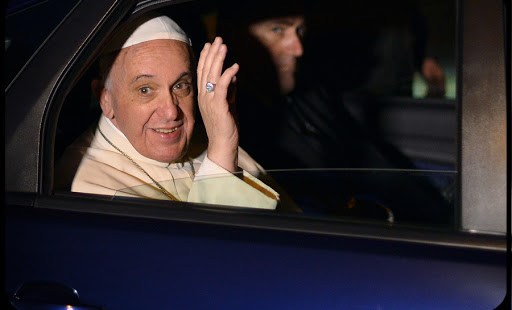 He denies being Superman, reaffirms Humanae Vitae, and hints that Benedict XVI might not be the only pope to resign in modern times.

Gosh, it had been a while, but papal interviews are back!

The latest is with the Italian daily Corriere della Sera, and it seems to show Pope Francis has learned a thing or two from his previous interviews. While he still has his unique, down-to-earth style, he answers certain questions more directly, leaving less room for doubt on his position on controversial issues.

Catholic News Agency has published a full translation into English, but here are some of the highlights.

1) Pope Francis says he gets advice from Benedict XVI, and indicates he might not be the last pope emeritus

“[Question:] The relations with your predecessor. Have you ever asked for the counsel of Benedict XVI?

“[Answer:] Yes. The Pope emeritus is not a statue in a museum. It is an institution. We weren’t used to it. 60 or 70 years ago, ‘bishop emeritus’ didn’t exist. It came after the (Second Vatican) Council. Today, it is an institution. The same thing must happen for the Pope emeritus. Benedict is the first and perhaps there will be others. We don’t know. He is discreet, humble, and he doesn’t want to disturb. We have spoken about it and we decided together that it would be better that he sees people, gets out and participates in the life of the Church. He once came here for the blessing of the statue of St. Michael the Archangel, then to lunch at Santa Marta and, after Christmas, I sent him an invitation to participate in the consistory and he accepted. His wisdom is a gift of God. Some would have wished that he retire to a Benedictine abbey far from the Vatican. I thought of grandparents and their wisdom. Their counsels give strength to the family and they do not deserve to be in an elderly home.”

Pope Francis doesn’t say he plans on retiring from the papacy, but he certainly leaves open the possibility that popes resigning could become a norm.

2) Francis doesn’t like his “mythology”, says he’s not a “superman”

“[Question:] But has this message been understood? You have said that the Francis-mania will not last long. Is there something in your public image that you don’t like?

“[Answer:] I like being among the people. Together with those who suffer. Going to parishes. I don’t like the ideological interpretations, a certain ‘mythology of Pope Francis’. When it is said, for example, that he goes out of the Vatican at night to walk and to feed the homeless on Via Ottaviano. It has never crossed my mind. If I’m not wrong, Sigmund Freud said that in every idealization there is an aggression. Depicting the Pope to be a sort of superman, a type of star, seems offensive to me. The Pope is a man who laughs, cries, sleeps calmly and has friends like everyone. A normal person.”

But of course, it’s that kind of direct, down-to-earth attitude which is exactly what people like – and fuels “idealization.”

3) The Church’s child abuse scandal is “terrible,” but the Church, particularly due to Benedict XVI’s leadership, has come a long way

“I want to say two things. The cases of abuses are terrible because they leave extremely deep wounds. Benedict XVI was very courageous and he cleared a path. The Church has done so much on this path. Perhaps more than anyone. The statistics on the phenomenon of the violence against children are shocking, but they also show clearly that the great majority of abuses take place in the family environment and around it. The Catholic Church is perhaps the only public institution to have acted with transparency and responsibility. No other has done more. And, the Church is the only one to be attacked.”

This is quite provocative stuff, particularly at the end there when he indicates he thinks the Church might be unfairly attacked. I don’t think other members of the hierarchy could say things like this without causing scandal.

4) Marriage is between a man and a woman, but he’s interested in investigating whether the Church could approve of certain kinds of civil unions

“[Question:] Many nations have regulated civil unions. Is it a path that the Church can understand? But up to what point?

“[Answer:] Marriage is between a man and a woman. Secular states want to justify civil unions to regulate different situations of cohabitation, pushed by the demand to regulate economic aspects between persons, such as ensuring health care. It is about pacts of cohabitating of various natures, of which I wouldn’t know how to list the different ways. One needs to see the different cases and evaluate them in their variety.”

This is sure to provoke discussion. Francis hasn’t actually proposed anything here. He seems to be more just thinking out loud. Where this actually leads, we’ll just have to wait and see.

“[Question:] At half a century from Paul VI’s Humanae Vitae, can the Church take up again the theme of birth control? Cardinal Martini, your confrere, thought that the moment had come.

“[Answer:] All of this depends on how Humanae Vitae is interpreted. Paul VI himself, at the end, recommended to confessors much mercy, and attention to concrete situations. But his genius was prophetic, he had the courage to place himself against the majority, defending the moral discipline, exercising a culture brake, opposing present and future neo-Malthusianism. The question is not that of changing the doctrine but of going deeper and making pastoral (ministry) take into account the situations and that which it is possible for people to do. Also of this we will speak in the path of the synod.”

This should pretty well clear up for people where Pope Francis stands on contraception. Unsurprisingly, he endorses the long-standing Church teaching.

6) He has informal relations with the government of China

“We are close to China. I sent a letter to president Xi Jining when he was elected, three days after me. And he answered me. There are relations. They are a great people, whom I love.”

The Catholic Church in China has been greatly persecuted in the last few years. Could Pope Francis help bring freedom and peace to Christians there?

Other topics addressed by Pope Francis include the role of women in the Church, relations with the Orthodox Church, his view of Europe, and bioethics. Read the full interview here.