All Values Are Non-Negotiable, Pope Says in New Interview 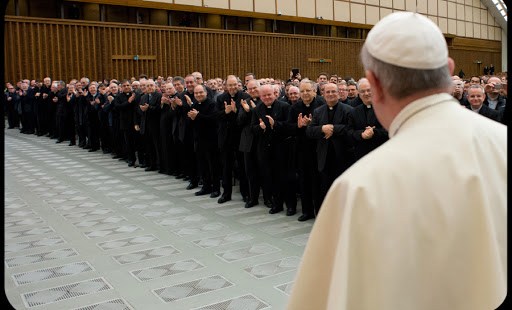 “I have never understood the expression non-negotiable values. Values are values, and that is it.”

Emphasizing that “values are values” and leaving aside the expression “non-negotiable values,” Pope Francis has underscored the importance of the entirety of the Church’s social doctrine.

In an interview published March 5 in Italian daily “Corriere della Sera,” he was asked about appeals to “the so-called ‘non-negotiable values’, especially in bio-ethics and sexual morality.”

“I have never understood the expression non-negotiable values,” responded the Pope. “Values are values, and that is it. I can’t say that, of the fingers of a hand, there is one less useful than the rest. Whereby I do not understand in what sense there may be negotiable values.”

He added that what he wishes to say about “the theme of life,” he has stated already in “Evangelii gaudium.”

In the Italian context in which the interview was granted, the expression “non-negotiable values” is the fruit of a national debate that began in the 1980s — when the Church in Italy celebrated its national convention in Loreto in 1985.

The convention ended with an appeal for the unity of Catholics committed to politics: which meant support for Christian Democracy, a political party founded in 1943 and supported by the Church.

The “table of values” in the appeal included “the primacy and centrality of the human person, the sacrality and inviolability of the human person from conception to natural death, the contribution of women in social development, the role and stability of the family founded on marriage, social pluralism and the freedom of education, privileged attention to those who are weaker, and freedom and social justice in the world.”

When Christian Democracy collapsed in 1994, the Italian bishops’ conference switched its focus from the support to a specific party, to supporting whatever party would advance these values.

During the years 2004 and 2005, there was a wider discussion in Italy about a law on in-vitro fertilization that led to the promotion of a referendum to abrogate the law, considered by the promoters of the referendum too influenced by Christian values.

Cardinal Camillo Ruini, who was then president of the Italian bishops’ conference and vicar general of the Diocese of Rome, coined and began often using the expression “non-negotiable values”, referring primarily to “life issues” such as abortion, adoption and in-vitro fertilization, to grab headlines and to arouse a political debate.

Benedict XVI also used the expression on several occasions, yet he did so in a wider sense: not simply referring to Italian politics.

He would at times speak of the “so-called non-negotiable values,” thus pointing out that there are no “negotiable” values in the Church’s social teaching.

At his Christmas address to the Roman curia in 2012, he spoke of values “fundamental and non-negotiable for the human condition,” in the context of the dialogue between the Church, and the state and society.

“In her dialogue with the state and with society, the Church does not, of course, have ready answers for individual questions,” he said, saying the Church can offer, in dialogues, a memory of the human condition.

And addressing the Forum of Catholic-Inspired Non-Governmental Organizations Dec. 1, 2007, Benedict XVI maintained that there are ethical principles” which are non-negotiable “by their very nature and their role as the basis of social life.” This would lead to solidarity he said, but that it is to be paired with an “authentic spirit of freedom” which “will help the initiative of the members of non-governmental organization to create a broad gamut of new approaches and solutions with regard to those temporal affairs which God has left to the free and responsible judgement of every individual.”

On both occasions, Benedict referred to the entirety of values acknowledged and promoted by the social teaching of the Church.

Thus set in the Italian context, despite first appearances, Pope Francis actually puts himself in continuity with Benedict XVI in the answer he gave to “Corriere della Sera” on “non-negotiable values.”

Benedict XVI and Pope Francis both have underscored that none of the principles of the Church’s social teaching is less important, and that there is not a rank of values between life issues and social issues.

Pope Francis’ great consideration  of life issues is shown, as he indicated to Corriere della Sera, by what he wrote in “Evangelii gaudium”:

“Reason alone is sufficient to recognize the inviolable value of each single human life, but if we also look at the issue from the standpoint of faith, ‘every violation of the personal dignity of the human being cries out in vengeance to God and is an offence against the creator of the individual.’”