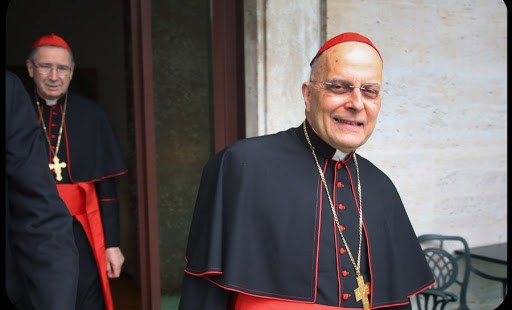 Cardinal Francis George of Chicago told his archdiocese that Lent finds him in “poor health” as cancer in his right kidney that was dormant for over a year is “showing signs of new activity.”

“While I am not experiencing symptoms of cancer at this time, this is a difficult form of the disease, and it will most probably eventually be the cause of my death,” he wrote in his most recent column for the Catholic New World archdiocesan paper.

Cardinal George said that after “many tests, scans, biopsies and other inconveniences,” he was advised to enter into an aggressive round of chemotherapy which will take place over the next two months.

The 77-year-old cardinal underwent a medical procedure August of 2012 that discovered cancerous cells in his kidney and in a nodule that was removed from his liver.

In July 2006, at the age of 69, the cardinal underwent a five-hour operation to remove his bladder, prostate gland and sections of his ureters, the tubes which connect the kidneys to the bladder.

On his chemotherapy treatment in 2012, he recalled that he was able to maintain his administrative schedule “well” although “my public schedule was sometimes curtailed because of lowered immunity.”

“As I prepare for this next round of chemo, I ask for your prayers, which have always sustained me, and for your understanding if I cannot always fulfill the schedule already set for the next several months.”

In his column, Cardinal George also said “I imagine this news will increase speculation about my retirement.” However, the “only certainty is that no one knows when that will be, except perhaps the Holy Father, and he hasn't told me.”

“As required by the Code of Canon Law, I submitted my resignation two years ago and was told to wait until I heard from the pope,” he explained. “The consultation the pope makes through the Apostolic Nuncio takes a good number of months, and it hasn’t formally started yet.”

“In the meantime, Lent gives me a chance to evaluate not only my life of union with the Lord but also my life and actions here as Archbishop of Chicago.”

Cardinal George was born in Chicago on Jan. 16, 1937 and is the first native of Chicago to become archbishop of the city. Pope John Paul II named him Bishop of Yakima in Washington State in 1990. After serving for five years, he was appointed archbishop of Portland, Oregon, on April 30, 1996.

Less than a year later, on April 8, 1997, Pope John Paul II named him the eighth Archbishop of Chicago after the See had fallen vacant with the death of Cardinal Joseph Bernardin on Nov. 14, 1996.