Thwart Temptation with the Word of God, Pope Exhorts 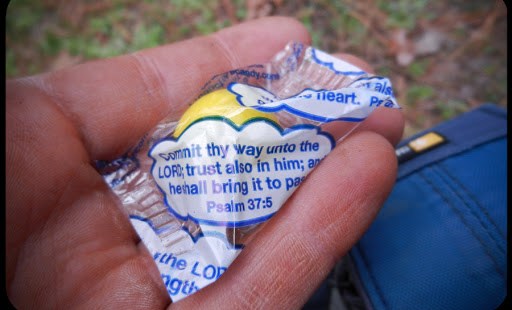 In his Sunday Angelus message today, Pope Francis stressed the importance of resisting temptations by finding refuge in God’s word.

Reflecting on Sunday’s gospel passage of the temptation of Jesus by Satan in the desert, the Pontiff said, “note well: how does Jesus respond? He doesn’t dialogue with Satan, like Eve had done in earthly paradise. Jesus knows well that with Satan, one cannot dialogue, because he’s very cunning. For this reason, Jesus, rather than dialoguing like Eve did, chooses to take refuge in the word of God, and responds with the force of this word.”

“Let us remind ourselves of this in moments of temptation, in our own temptations: no discussions with Satan, but simply defense with the word of God, and that will save us,” he urged the crowds filling St. Peter’s Square on March 9.

When Jesus is in the desert for 40 days before beginning his mission, Satan approaches him with “three groups of temptations,” noted the Pope, “and we know them well.”

First, “economic well-being, indicated by the possibility of transforming stones into bread;” second, a “spectacular lifestyle” demonstrated in the idea of “throwing himself down from the highest point of the temple of Jerusalem and being saved by the angels,” and lastly, “the shortcut to power and domination” by worshiping Satan.

In tempting Jesus with wealth, miracles, and power, Satan seeks to offer “false messianic hopes” by “distracting him from the Father’s plan,” explained Pope Francis.

Rather than following God’s “way of sacrifice, of a loving self-offering in expiation,” Satan tempts Jesus with “an easy road of success and power.”

Yet, “Jesus clearly rejects all these temptations and reiterates his determination to follow theway established by the Father, without any compromise with sin.” He is able to do so by responding to Satan with the word of God: quoting scripture.

Later, Jesus’ words “will be translated into actions” when he demonstrates his “absolute faithfulness to the Father’s plan of love” by dying for sinners.

“The hour of the passion and cross” is the “final showdown” between Satan and Jesus, where Jesus “will take his final victory, the victory of love!” exclaimed the Pontiff.

Pope Francis then reminded those in attendance that “lent is a favorable time for all of us to make a journey of conversion, honestly confronting this passage from the gospel.”

“Let us renew the promises of our Baptism,” he encouraged. “Let us renounce Satan and all his works and seductions – because he is a seducer – in order to walk the paths of God and arrive at Easter in the joy of the (Holy) Spirit.”

The Holy Father then led the Angelus prayer, closing his audience with greetings to the pilgrim groups who had gathered to pray with him.

Before wishing everyone a good Sunday, Pope Francis asked especially for prayers for himself and the Roman Curia, who begin a retreat week of prayer and meditation this evening.