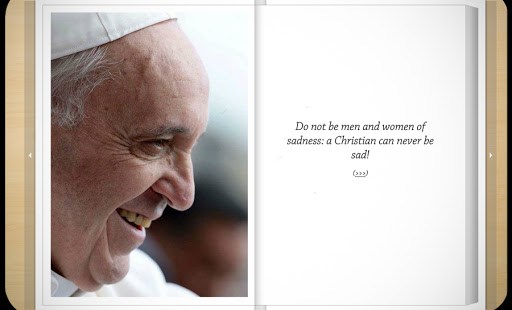 Vatican commemorates Pope with a collection of his celebrated phrases.

In honor of the one year anniversary of Pope Francis’ election as Bishop of Rome, the Vatican website has published a special online book, compiled of various phrases he has spoken throughout the year.

Entitled “Do we want to be holy? Yes or no?” the online publication can be found on the Vatican’s official website by clicking on one’s language of choice, after which a pop-up window appears with the book’s cover and title.

Beginning with the Pope’s familiar plea for the faithful not to be “men and women of sadness” because “a Christian can never be sad,” the virtual memoir offers short quotes by Pope Francis taken from his homilies, speeches and addresses given throughout the year.

Below each quote is a link to the exact text from which it has been extracted, and each phrase is accompanied by a picture of him on the adjacent page, courtesy of Vatican daily news source L’Osservatore Romano.

The book commemorates the pontiff’s election as Bishop of Rome on March 13 of last year, on which his opening words as Pope during his first Urbi et Orbi blessing already foreshadowed the unique tone that has defined much of his impactful first year as head of the Catholic Church.

During the speech, he observed how “it was the duty of the Conclave to give Rome a Bishop,” and that “It seems that my brother Cardinals have gone to the ends of the earth to get one…”

“But here we are…I thank you for your welcome,” the newly-elected pontiff expressed, adding that “The diocesan community of Rome now has its Bishop.  Thank you!”

Offering his first moment of prayer for retired pontiff Benedict XVI, Pope Francis led his new flock in the traditional prayers of the blessing, consisting of an Our Father, Hail Mary and a Glory Be.

Afterwards, he explained to the thousands gathered below in St. Peter’s Square that “now, we take up this journey: Bishop and People,” noting that it is a “journey of the Church of Rome which presides in charity over all the Churches.”

“A journey of fraternity, of love, of trust among us.  Let us always pray for one another.  Let us pray for the whole world, that there may be a great spirit of fraternity.”

Pausing for a moment before giving his official first blessing as Bishop of Rome to the Church and to the world, Pope Francis asked for a special “favor” which has become a common request and a unique trait of his pontificate.

“Before the Bishop blesses his people, I ask you to pray to the Lord that he will bless me: the prayer of the people asking the blessing for their Bishop.  Let us make, in silence, this prayer:  your prayer over me.”

Extending his blessing then to all “men and women of good will” the new pontiff thanked those gathered again for their welcome, stating that “we will see each other soon,” and wishing them “good night and sleep well!”

The special commemorative book can be found on the Vatican website under the French, German, Italian, English, Spanish and Portuguese sections by either clicking on the pop-up window, or on the image of the Pope himself on the homepage.