The True Drama of “True Detective” 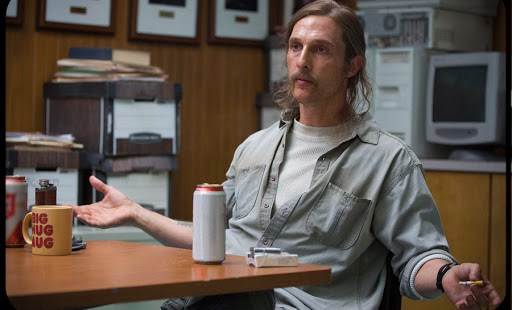 There’s darkness in all of us, even if we aren’t willing to admit it.

In HBO’s philosophical crime series, “True Detective,” the jaded Rust Cohle (played by Matthew McConaughey) spends much of his time contemplating a world where only matter exists. But, rightly unable to make heads or tails of that premise, he instead ends up entertaining more mystical notions like Nietzsche’s “eternal return.” (“Someone once told me time is a flat circle,” he murmurs. “Everything we’ve ever done or will do we’re gonna do over and over and over again.”)

Then, there’s Christianity. Cohle may be unable to embrace materialism, but one thing he’s willing and able to do is pick apart “the God delusion” he sees all over Louisiana. Shady politicians, eccentric preachers, and neurotic faithful all seem to confirm Cohle’s intuition: that religion only makes a bad place worse.

“The ontological fallacy of expecting a light at the end of the tunnel,” he begins, surrounded by Lone Star beer and cigarette smoke. “Well, that’s what the preacher sells. Same as a shrink. See, the preacher encourages your capacity for illusion, then he tells you it’s a [expletive] virtue. Always a buck to be had doing that. I mean, it’s such a desperate sense of entitlement, isn’t it? Surely this is all for me.”

He raises his eyes to heaven, mocking what he sees as the egocentrism of religious thinking. “Me…me…me. I…I…I. I’m so [expletive] important!”

Matthew McConaughey – the very man who brought this character to life – made an acceptance speech at the Oscars earlier this month that sounded… well, different.

“First off, I want to thank God, because that’s who I look up to. He has graced my life with opportunities I know are not of my hand or any human hand. He has shown me it’s a scientific fact that gratitude reciprocates. In the words of the late Charlie Lawton: ‘You got God, you got a friend. That friend is you.’”

If Cohle were backstage waiting for McConaughey, how would he react?

We don’t have to wonder. In an article titled "Why bring God into it, Matthew McConaughey?," Sam de Brito, writing for the Sydney Morning Herald, channels Cohle’s attitude perfectly:

“It was as if I’d discovered a close friend is an anti-vaxer or my partner sees dead people… If it seems a little narcissistic, we need just remind ourselves it sits well within the Christian context that teaches an all-knowing, all-powerful, all-loving God listens specifically to the teeny, tiny analogue channel of one’s individual prayers. Usually, we have to wait for Mel Gibson to fall off the wagon before we hear such nonsense from a movie star.”

And the true drama of “True Detective,” in a way, is Cohle’s journey from just this kind of dark cynicism into the light of faith.

In the third episode, we begin to see just how critical of faith this professed materialist is. He scoffs as a traveling preacher gives a long, passionate sermon, muttering under his breath about the IQ of the crowd and the crass mercantilism of the service. But in an extended clip online, we get to hear the sermon in its entirety:

Flannery O’Connor’s spirit is everywhere in “True Detective,” particularly in this scene. The Catholic novelist always insisted that her stories about Bible-thumping fundamentalists and street-preaching nihilists were all about grace. “All human nature vigorously resists grace,” she once said, “because grace changes us and the change is painful.”

Cohle, haunted by his broken past and the disturbing case at hand, is worlds away from the content of the sermon. But is it because of the preacher’s fevered dualism? The crowd’s blank, credulous stares? The suspicion that there are potential suspects around him? Or is it, at bottom, his own wounded heart?

Arrows of grace lurk in those words, and they threaten to rob him of his darkness:

“You are a stranger to yourself, and yet he knows you… How, then, can I know sorrow? How, then, can I know despair? Does the rain know sorrow? Do the grass and the mountains, the beautiful mountains, know despair? Such is not His province, and so not be our purpose. Be in Him, of Him, and then know peace. That is His gift to us. Our birthright. In the end, we will find ourselves at the beginning, and will at last know ourselves, and our true faces will weep in his light. And those tears, those tears will feel like a warm rain. Amen.”

But ironically, the more Cohle confronts the fleeting fragments of human life through his murder investigations, the more he finds himself wading into the same waters as the faithful. Seen from eternity, “all is vanity”; and the more Cohle knows this in his bones, the more the sense of some otherworldly fulfillment presses on him – until, in one powerful scene, an elderly woman with dementia chants about death and eternal life during one of their interviews. Cohle is bothered. “Sure hope that old lady was wrong,” he confesses afterward. “About death not being the end of it.”

We see the walls of his doubt crumbling. But it’s not until the final episode, when he confronts the heart of darkness – the embodiment of sin and the void of death – that his heart is pried open by grace.

“There was a moment, I know, when I was under in the dark, that something… whatever I’d been reduced to, not even consciousness, just a vague awareness in the dark. I could feel my definitions fading. And beneath that darkness there was another kind – it was deeper; warm, like a substance. I could feel man – I knew, I knew my daughter waited for me, there. So clear. I could feel her. I could feel the peace of my Pop, too. It was like I was part of eve
rything that I have ever loved, and we were all, the three of us, just fading out. And all I had to do was let go, man. And I did. I said, ‘darkness, yeah,’ and I disappeared. But I could still feel her love there. Even more than before. Nothing, nothing but that love. And then I woke up.”