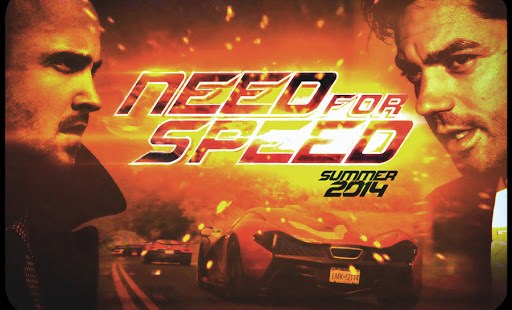 At least it was true to the video game.

This movie is stupid – let’s just go ahead and get that out of the way right here at the beginning. It’s dumb with a capital “Duh!” If you put an infinite number of monkeys in a room with an infinite number of laptops, none of them would ever manage to compose anything as silly as the script for Need For Speed. I’m concerned that talented screenwriters whose heartfelt intelligent projects have all been rejected by the major studios will see that this script actually got filmed, lose all faith in humanity, and dazedly wander off into the wilderness never to be seen again.

What makes the writing so bad, you ask? How about the fact that everything is so generically plotted that the cast could simply have appeared on screen in white t-shirts labeled with their character descriptions rather than bothering with names. Here, I’ll prove it: the story begins with The Hero who, along with his sidekicks, Cool Black Guy, Serious Latino Guy, Crazy Latino Guy, and Dead Guy, spends his days custom modifying cars and his evenings participating in illegal street races. Unfortunately, the garage he inherited from his father is on the verge of closing (the most talented can never pay their bills in these kind of movies for some reason), so when The Villain arrives with a lucrative offer to rebuild The Hero’s father’s one-of-a-kind Product Placement, The Hero agrees to it despite the fact that The Villain is both a snobbish bore and is dating The Hero’s Ex-Girlfriend (who, by the way, also happens to be Dead Guy’s sister).

Things go well at first and The Hero manages to rebuild and sell the Product Placement to a potential Love Interest. Offended that The Hero made the sell on his own, however, The Villain challenges The Hero to a race, winner to take all the proceeds of the sale. And because The Villain just happens to own three illegal racing cars instead of only one or two, he offers to let Dead Guy drive one and join in the fun. After a furious back and forth which leaves The Hero in the lead as the finish line approaches, The Villain makes a dangerous move which sends Dead Guy plummeting off a bridge to his doom. The Hero, being a hero, forgets the race and rushes to the side of his friend, allowing The Villain to escape the scene and pin the blame for Dead Guy’s demise on The Hero.

Two years later, The Hero emerges from prison with a plan. All he needs to do is reassemble his old crew (minus Dead Guy, of course – this isn’t a zombie flick), obtain a fast car, and score an invitation to the DeLeon, the grand mother of all underground street races. There, he hopes to prove his innocence and bring wheeled justice to The Villain, who is also participating. But there’s a few catche – to get to the DeLeon, The Hero must break parole, which won’t go over well with the police. On top of that, once The Villain finds out The Hero is coming, he offers a reward to anyone who can stop him. And finally, the fastest car The Hero can think of is the Product Placement, and the Love Interest won’t part with it unless she’s allowed to come along on the cross country trip. Who could have seen that development coming?

Well, everyone of course. For a movie centered around a subculture that custom modifies everything they touch, there amazingly isn’t a single part of Need For Speed that isn’t straight off the assembly line. If it was revealed that the script for this movie ever got past the outline stage before filming started, it would come as a huge surprise. It is THAT stupid.

That being said, stupid can have its occasional charms. Need For Speed is actually okay if all you’re in the mood for is some mindless action fare. While stuntman turned director Scott Waugh may not be able to overcome the shortcomings of the script where his actors are concerned, he does bring a certain flair to any scene involving a car. A lot of the pre-publicity for