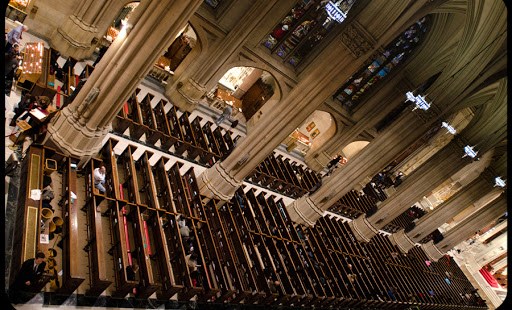 Two years ago on St. Patrick’s Day, New York’s Cardinal Timothy Dolan stood on the steps of St. Patrick’s Cathedral overlooking Fifth Avenue and announced an ambitious $177 million restoration project that would ensure that New Yorkers and the rest of the world would be able to enjoy the famed Cathedral for centuries to come. Known as “America’s Parish Church,” St. Patrick’s Cathedral first opened its doors 135 years ago. Today, it’s not only the pride of New York’s Catholics, but a home for pilgrims from all over the world simply looking for a place of rest and prayer.

In many ways, however, St. Patrick’s Cathedral is the crowning achievement of the Irish immigrants to America—a sign to the rest of the world not only of the Irish’s success, but also a visible witness of the possibility and hope of a better future for all.

In a 1997 article in City Journal, William Stern observed that “Between 1820 and 1830, immigration had swelled the U.S. Catholic population 60 percent to 600,000, with no end in sight. The new immigrants were mostly Irish—impoverished, ignorant, unskilled country folk, with nothing in their experience to prepare them for success in the urban environs to which they were flocking.”

Essential to the success of the immigrant’s assimilation in the new land was John Hughes, who in 1842 was appointed bishop of New York and in 1958, named archbishop, the first in the city’s history. Hughes had immigrated to the United States in 1817 at age twenty, though perhaps the most formative event in his life had taken place five years earlier, at age fifteen, when his sister died. Due to Catholic persecution in Ireland, the family priest was forbidden to enter the cemetery to perform the burial rites. This memory would haunt Hughes, and later led him to write that he dreamed of “a country in which no stigma of inferiority would be impressed on my brow, simply because I professed one creed or another.”

Upon arrival in New York, Hughes made the education of his fellow Irish immigrants his top priority, as he wanted them to have the skills and education to make it in the new land. According to Elizabeth Martin, a curator of a new exhibition titled "A Monumental Legacy," which highlights Hughes’s efforts to build St. Patrick’s Cathedral, “New York’s Irish immigrants came with nothing—not even a full stomach—and within a decade they were middle class. Hughes crafted the Irish-American identity for them.”

Hughes announced his plans to build St. Patrick’s Cathedral in 1853 in what he would describe as “an ornament and boast of the city of New York.” While the Cathedral would take twenty years to complete due a construction hiatus during the Civil War, Hughes’s dreams of a cathedral for the world to enjoy is now one of the country’s most visited landmarks, welcoming over 5.5 million visitors each year. As Cardinal Dolan recently noted, “Once referred to as ‘Hughes’s Folly,” St. Patrick’s Cathedral is now a world-renowned testimony to the immigrants who built it and a visible reminder that God is present in the hustle and bustle of Manhattan.”

Over the years, St. Patrick’s has been the stage for some of American history’s most memorable events—from the 1968 memorial of Robert F. Kennedy, to the papal visits of Popes Paul VI, John Paul II, and Benedict XVI, and the funerals of sports figures like Joe DiMaggio and Babe Ruth. Yet while St. Patrick’s might forever be enshrined in the memory of most Americans because of these events, it is equally accessible to any passerby on the street, regardless of status.

Outside the Cathedral hang several banners advertising that “In a city where no one sleeps, everyone needs a place to pray.” While the Cathedral might best be known for its neo-Gothic style architecture, its towering spires, the ornate altars, and its booming organ, all of this is secondary to the fact that it’s a place where a New York City hedge fund manager can pop in for fifteen minutes of prayer, a homeless woman can find respite from the bitter winter snow, and a Midwestern tourist can contemplate the beauty of the structure—and each find exactly what he or she is looking for in that very moment. It’s also a reminder that the transcendent can be made real—even for those hostile to such a possibility, as writer Ann Hood described in a moving New York Times article in 2012.

In his April 2008 visit to the Cathedral, Pope Benedict XVI remarked that, “The spires of St. Patrick’s Cathedral are dwarfed by the skyscrapers of the Manhattan skyline, yet in the heart of this busy metropolis, they are a vivid reminder of the constant yearning of the human spirit to rise to God.”

At the turn of the nineteenth century when Irish immigrants made their way to America, they did so to escape a famine that had devastated not just their country’s economy, but also its spirit. Archbishop John Hughes made it his life’s mission to reclaim that spirit, giving Irish New Yorkers a sense of purpose and belonging in their new home. Yet while Hughes’s project may have been focused on his fellow Irish Americans, his efforts continue to be a gift for all of us today.

St. Patrick’s Cathedral—whether seen in person or simply through its iconic presence in television and film—serves as a reminder that we are all immigrants in some fashion. As the novelist Walker Percy once wrote, we are “strangers in a strange land,” making sense of the world around us and seeking aid from our own famines, in whatever form it may take. The gift of St. Patrick’s Cathedral is that it provides the space for us to do this—and the beauty to remind us of the hope of a better future.  Such was the reality of the Irish immigrants of yesteryear and we pilgrims of today.