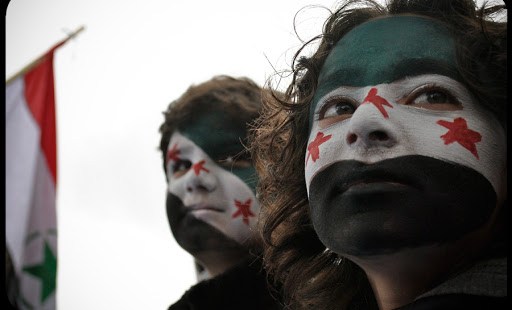 As today marks the third anniversary of uprisings which led to civil war in Syria, Catholic leaders there and in neighboring Lebanon have reflected on its devastating effect on both countries.

“It creates a huge impact on (the Lebanese) in all aspects, and in terms of security issues…it's had a huge impact,” Wadih Daher, assistant to Archbishop Issam John Darwish, told CNA in a March 13 interview.

Daher spoke on behalf of the bishop, who leads the Melkite Greek Archeparchy of Furzol, Zahle and the Bekaa, on Lebanon's border with Syria.

Conflict began March 15, 2011, when demonstrations protesting the rule of president Bashar al-Assad and his Ba'ath Party sprang up nationwide. The following month, the Syrian army began to deploy to put down the uprisings, firing on protesters.

Now, three years on, an estimated 140,000 persons have died in what has become a civil war. The U.N. quit counting the bodies last July, leaving its estimates at 100,000, saying it could no longer verify its sources.

Because of the civil war, half of Syria's population have fled their homes. 6.5 million Syrians are believed to have been internally displaced by the war, and there are 2.5 million Syrian refugees living in nearby countries, most of them in Lebanon, Turkey, and Jordan.

Of those 2.5 million, more than 1 million are in Lebanon, a country whose population, three years ago, was slightly over 4 million.

Now, one in every five residents of Lebanon is a refugee from Syria.

The refugees’ impact on Lebanon has thus been “first of all (one) of demography,” Daher told CNA. “There are a quantity of people coming, so all the villages are full with people right now.”

Secondly, he noted that the workers entering the country have produced a “cheap replacement" for the Lebanese labor force. “The Lebanese carpenter makes $30 a day, (but) the Syrian will work for $10 a day,” Daher explained.

Despite these challenges to their livelihood, housing, and security, many Lebanese are doing their best to accommodate the influx of refugees from Syria. Archbishop Darwish told Aid to the Church in Need recently, “we try to support them emotionally and financially.”

The Furzol and Zahle archeparchy runs its own refugee camps in the Bekaa valley, where many refugees first enter Lebanon. Zahle is located fewer than 15 miles from the Syrian border.

The archeparchy has been helping the refugees to pay rent and get work; Archbishop Darwish noted that they “are in need of the very basics of daily life – food, educational opportunities for their children, medical care” and that they “came here with literally nothing.”

In Jordan at the U.N.’s Zaatari refugee camp, a Safeway supermarket has opened, reported the BBC’s Yolande Knell, noting the increasingly long-term nature of the refugee crisis. The camp is now home to nearly 150,000 people, CNN has reported.

Meanwhile inside Syria, the Melkite Greek Archbishop of Homs, Hama, and Yabrud has emphasized Christians’ desire to remain inside their country.

“We Christians are living in fear, the future is uncertain, but we want to stay in our homeland,” Archbishop Jean-Abdo Arbach told Aid to the Church in Need March 14. He added that many residents of Homs have returned to the city, since “the main fighting is taking place in the cities of Yabrud and Hama.”

Archbishop Arbach’s residence is in Homs, and he has remained there: “for the faithful it is important that their priests and their bishop bear the suffering and persevere like everyone else.”

His archdiocese is located on Syria’s western edge which is contested, but largely held by the Assad regime. “The situation in and around Homs is calm,” he said. “Government troops have almost complete control over the region and the rebels control only four to five districts.”

The north of Syria, along the border with Turkey, is largely held by rebel forces. The rebels are made up of a variety of groups, including moderates, such as the Free Syrian Army; Islamists such as al-Nusra Front and the Islamic State of Iraq and the Levant; and Kurdish separatists.

The Islamic State of Iraq and the Levant controls much of the Euphrates river watershed, in the northeast of Syria. In the city of Ar Raqqah, now held by the Islamist group, Christians are now forced to pay “jizya,” a tax on non-Muslims levied under sharia law.

Kidnappings have been a feature of the civil war for some time; in April 2013, the Greek Orthodox and Syriac Orthodox bishops of Aleppo were abducted while they were on their way back to the city from a meeting in which they were negotiating for the release of two priests – one Greek Orthodox, and one Armenian Catholic.

Their fate is unknown, though there are rumors that only one bishop is still alive, and is being kept in either Syria or Turkey.

At the beginning of this week a group of 12 Greek Orthodox nuns plus three of their helpers who had been kidnapped from Ma’loula in December 2013, were returned safely by their abductors, al-Nusra Front.

At a meeting of Syria’s Assembly of Catholic Heirarchs March 12, the bishops issued a call for all Christians who have been kidnapped in the civil war to be released; Gregorios III, Melkite Greek Patriarch of Antioch, said the nuns’ release was an encouraging sign.

“We are keen to also see the same concern for the two bishops…as well as the priests, and many, many other people (who have been) kidnapped, especially those who have nobody to care for them,” Patriarch Gregorios told Aid to the Church in Need.

He noted particularly his concern for the abducted poor, “who have no support, no relations to help them.”

Three years of civil war in Syria have brought displacement, starvation, disease, and death to the nation’s citizens. Neither side has been able to gain decisive victory, and the international community has encouraged peace talks, though two rounds of negotiations in Switzerland have failed to garner success.

Iran and Russia have supported the Assad regime, while western and Arab nations have tended to favor rebel groups.