Wise Blood: Heather King on Prayer and the Interior Life 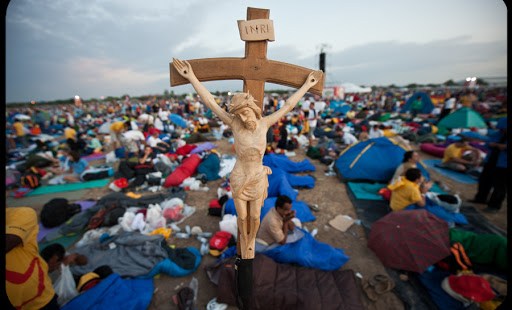 Prayer is not for the faint of heart. Prayer is meant to rip us apart and (eventually) put us together again as something strange, unexpected, and new.

We are very proud to introduce today a new weekly column on prayer and the interior life written by the renowned Catholic spiritual writer, Heather King. As Aleteia pursues its new evangelical focus, we will not be forgetting the need to nourish both ourselves and our audience with reflections and exhortations on the interior life. You can’t give what you don’t have. Hence Heather’s new column, which you will find here on the homepage every Tuesday morning. I hope you enjoy it. –Daniel McInerny, Editor, Aleteia English edition.

I’m thrilled to embark on this weekly column for Aleteia on prayer and the interior life.

The title of the column, Wise Blood, is of course after the Flannery O'Connor novel of the same name. Synopsis, in case you’re unfamiliar with the book: Hazel Motes, WWII vet, returns to his Tennessee hometown and dogged by a crisis of faith, becomes a backwoods, virulently anti-God, preacher. All his endeavors—romantic, financial, spiritual—meet with crushing humiliation and failure. He blinds himself with quicklime, wanders off in a thunderstorm, is found three days later dying of exposure, and is finished off by a cop.

In the eyes of his boardinghouse landlady Motes’ blinding of himself is a grotesque maiming; O’Connor has the vision and the guts to make the blinding Motes’ salvation. Not salvation in the “prosperity Gospel” sense: nothing gets “better.” Motes still has the same dim-witted, self-serving landlady. He dies friendless, alone, and poor. But, however briefly, and however high the cost, he has become an authentic human being. He is in right relation to God, his fellows, and himself. And that is everything.

In the preface to her novel, O’Connor noted:

“Wise Blood was written by an author congenitally innocent of theory, but one with certain preoccupations. That belief in Christ is to some a matter of life and death has been a stumbling block for readers who would prefer to think it a matter of no great consequence. For them Hazel Motes’ integrity lies in his trying with such vigor to get rid of the ragged figure who moves from tree to tree in the back of his mind. For the author, Hazel’s integrity lies in his not being able to.”

I say all this to establish that prayer is not some namby-pamby exercise to show ourselves how “good” we are. Prayer is not for the faint of heart. Prayer is meant to rip us apart and (eventually) put us together again as something strange, unexpected, and new. O’Connor knew that Motes’ desperate quest for meaning, his searing existential loneliness, his violent impatience with all that is false and shallow and corrupt, are precisely what make us human.

“If you live today, you breathe in nihilism,” O’Connor observed.  “In or out of the Church,  it's the gas you breathe. If I hadn't had the Church to fight it with or to tell me the necessity of fighting it, I would be the stinkingest logical positivist you ever saw right now.” That was in 1955.

Sixty years later, the situation hasn’t exactly improved. My own demographic, the hipsters of Silver Lake, Los Angeles, are well-educated, creative, good, hard-working, and concerned people who for the most part have not the slightest interest in or desire for Christ. But things have reached the point now where even fellow Catholics will say, “Don’t mention Christ. As soon as you mention Christ, you lose people.”

I can’t not mention Christ. Like Hazel Motes, I have never been able to get rid of the ragged figure moving in the back of my head.

We don’t need to avoid mentioning Christ. We need to get across that religion is a living, breathing, second-by-second encounter with Christ: our holy longing, our perpetual frustration with the gap between the way we wish we were and the way we actually are, our existential nostalgia and our existential guilt.

This encounter with Christ is exactly the periphery to which Pope Francis is calling us.

The way to evangelize is to walk the walk. The way to go to the periphery is to live on the periphery. The way to meet believers and non-believers alike is to say I, too, wake in the middle of the night and think “This cannot be all there is.” I, too, am torn apart by longing. I, too, wonder who and what I am serving. I, too, wonder if my life has meaning, whether I’ll die alone, if anyone will remember me after I’m gone.

The reason people are drawn to Pope Francis is not just what he says, but that he lives what he says.

The periphery is a place of danger and of extremes. That’s true whether we’re suburban husbands or newspaper editors or hermit monks; mothers of eight, CEOs, single twenty-somethings, or in a nursing home. The risk isn’t outer; it’s inner.

In The Varieties of Religious Experience, William James notes: “There can be no doubt that as a matter of fact a religious life, exclusively pursued, does tend to make the person exceptional and eccentric. I speak now not of your ordinary religious believer, who follows the conventional observances of his country, whether it be Buddhist, Christian, or Mohammedan… It would profit us little to study this second-hand religious life. We must make search rather for the original experiences which were the pattern-setters to all this mass of suggested feeling and imitated conduct. These experiences we can only find in individuals for whom religion exists not as a dull habit, but rather as an acute fever.”

Now that to me is exciting. Religion—life—as an acute fever. That doesn’t mean flamboyance or melodrama; it means allowing ourselves to let our desire for connection, for transcendence, for loving and being loved—go to the stars. In fact, the word desire comes from a Latin root meaning “awaiting what the stars will bring.”

I can’t say how delighted I am to be writing this weekly column for Aleteia. I can’t wait to see what the stars will bring.

Heather King is a Catholic convert, sober alcoholic, and writer whose most recent book is STRIPPED: Cancer, Culture and The Cloud of Unknowing. She speaks nationwide and blogs at Heather King: Mystery, Smarts, Laughs.