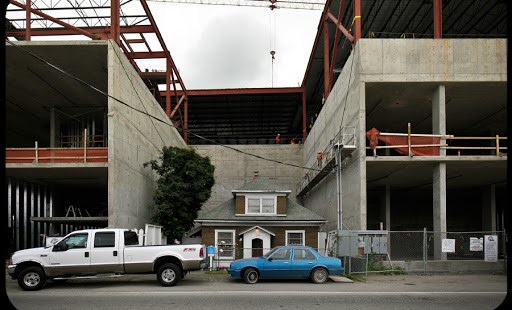 Her name was Edith Macefield, born in Oregon in 1921. She was still a young girl when she learned French and German and moved to England. She would often tell stories of how, as a British spy in Germany, she had escaped from the Dachau concentration camp and learned to play the clarinet with the help of her cousin, the legendary jazz musician Benny Goodman.

At the end of World War II, she remained in England and tended to children orphaned by the war. She became an expert on opera, and was a fan of Frank Sinatra. Her life continued to be fun and crazy until 1965, when her mother became seriously ill, causing her to return to the United States to assist her. Her mother lived in a house in Seattle, where she died a few years later. In order to preserve her memory, she decided to put down roots and stay there. Forever.

Thinking of her mother, she wrote and edited a 1,138-page novel in 1994 under a pseudonym, which she entitled Where Yesterday Began. The foreword read: “This story is for all those who have ever loved truly, deeply, irrevocably… even in the midst of disaster. For some, love simply dies and everyone moves on. But for some, love is as enduring as time, despite the obstacles, the separation, and the inevitable loneliness."

And this is where our story begins…

In early 2006, when she was 85 years old, a man named Barry Martin began his new job as manager for the construction of an upscale shopping center in Seattle. The investors had managed to buy all plots except Edith’s house. Thus, Barry’s first mission was to convince the elderly woman to sell it.

He thought that diplomacy would make for the best strategy: “Good morning, Mrs. Macefield. I’ve come to tell you that we’re going to be making a lot of noise today. If there are any problems, here’s my phone number.”

Edith took Barry up on the offer, and a few days later she picked up the phone… and asked him to take her to the hairdresser. “I can’t drive my old Chevy Cavalier,” Edith said. This was the beginning of a beautiful friendship.

When asked why she did not want to sell her home, even though she was being offered one million dollars and a house in another Seattle neighborhood, Edith replied, “I do not want to move. I do not need the money; money means nothing to me. This is my home. My mother died here on this very sofa. I returned to the U.S. from England to care for her. She made me promise that I would let her die at home and not in a convalescent home. I kept my promise, and I know that this is where I want to die, too – in my own home, on this couch.”

Edith’s story and her rejection of the tantalizing offer appeared in the press and came to Pixar’s attention.

Then along came Up, a wonderful love story in which a man decides to honor the memory of his wife by saving the house in which they experienced many years of happiness.

The film was released in 2009, but Edith never got a chance to see it, having died of pancreatic cancer on June 15, 2008. Barry took care of her until the end.

And what became of the house? Barry inherited it, and instead of offering it to his former bosses, he decided to keep his friend’s memory alive by selling it to a person who would commit to preserving it as Edith had left it.

It’s a beautiful story, do not you think?