Crimea Did Not Secede from Russia 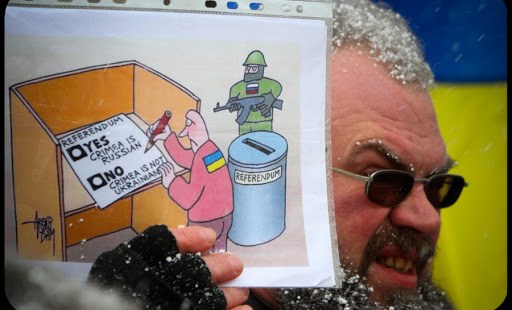 Last Sunday, 123% of registered voters cast ballots to rejoin Russia in Crimea’s pro-Russian Sevastopol. This was not a just and free election.

There’s a notion making the rounds in the Western press that Crimea’s transition back to Russian control is natural and perhaps desirable, even if (technically) a violation of international law.

The argument is straightforward: on Sunday, Crimeans voted by an overwhelming margin – 97%! – to secede from Ukraine and be annexed into Russia, reflecting Crimea’s strong ethnic, linguistic, and cultural ties to Russia.  We in the West claim to believe in the right of self-determination. Catholicism reflects this belief in its principle of subsidiarity, which demands that communities be allowed, as much as possible, to handle their own affairs. For these reasons, the United States is morally and legally bound to respect the outcome of the Crimean referendum.  We must defend Crimea’s transition back to Russian control no less than we defended our own departure from the British Empire, because the people have spoken.

Except… the Crimean people have not been given a genuine chance to speak.  The 97% result gives us immediate cause to be suspicious.  When was the last time a national election returned a 97% result?  That would be the re-election of “President” Berdimuhamedow of Turkmenistan, an ex-Soviet dictatorship.  Before him, Kim Jong-il (99.9%), Raul Castro (99.4%), and Syria’s Bashar al-Assad (97.6%) all joined the 97% Club. No one on this planet considers any of those election results credible. Speaking of this planet, fully 7% of American voters believe the moon landing was faked, and 4% believe that alien “lizard people” secretly control the government.  Does anyone sincerely believe that America’s craziest conspiracy theorists are more mainstream than Crimeans who want to stay Ukrainian?

If so, they shouldn’t.  The Kiev International Institute of Sociology has annually polled Crimea about joining Russia, most recently in February 2014, while Ukraine was in the throes of the AutoMaidan upheavel.  Only 41% of Crimeans supported secession in KIIS’s poll.  In 2013, only 36% of Crimeans wanted to join Russia. The year before, it was only 25%.  KIIS’s results are substantially consistent with the results of other respected polling firms.  Nor are they surprising. After all, for all the hoopla about how Crimea is predominated by ethnic Russians, they still account for fewer than 6 of every 10 voters there.  The suggestion that such stable opinions, on a major national question, with stable underlying demographics, could shift by fifty-six points, on their own, in less than a month, is preposterous – nearly as preposterous as the voter turnout reported by Russian authorities.  (Did you know that fully 123% of registered voters cast ballots in pro-Russian Sevastopol?)

But, of course, those numbers didn’t shift on their own.  Crimea was invaded by Russian troops, who ordered the legislature of the now-occupied territory to call an immediate referendum – and did so literally at gunpoint.  Russia then launched a massive, one-sided propaganda campaign to secure a “win.”  As the general director of KIIS said in an interview with FiveThirtyEight, “My Russian friends said they don’t remember, even in Soviet times, such intensive propaganda as on mass media in the last month.”  Russia then administered the election.  Russia, of course, is famous for its criminally fraudulent elections, in which it routinely jails opposition leaders, assassinates dissidents, spends taxpayer money on incumbents’ re-elections, and, of course, stuffs the ballot box.  But this was unnecessary in Crimea, where the ballots themselves guaranteed the outcome.

I reject the principle that a bare majority of voters has the right to overthrow a standing government on its own.  America’s support for self-determination is part-and-parcel of our belief in the rule of law.  Constitutional checks and processes are necessary to moderate the impetuous will of the mob, and Ukraine’s Constitution provides them.  Similarly, the Catholic principle of subsidiarity cannot be understood apart from the deep Catholic respect for the authority of law.

But even if we were to agree that a majority of voters have the innate right to secede from a sovereign state, it is impossible to conclude that Crimeans expressed that choice on Sunday in a free and fair election.

On 12 March 1938 – almost 76 years to the day before Vladimir Putin’s troops crossed the Ukrainian border – Adolph Hitler’s Wehrmacht invaded Austria, on the pretext of defending the German, pro-Nazi minority.  Austria’s legitimate government begged for assistance from the Allied powers, but was ignored.  The next day, the Austrian legislature – now surrounded by Nazi troops – approved the annexation, and a national referendum on 10 April claimed that 99.7% of Austrian voters supported the Anschluss.  Wise politicians recognized the result as a fraud and began preparing for war with Hitler.  History has given us a term for those who, instead, chose to accept Hitler’s fake vote: “useful idiots.”

James Heaney is an intern for Aleteia.