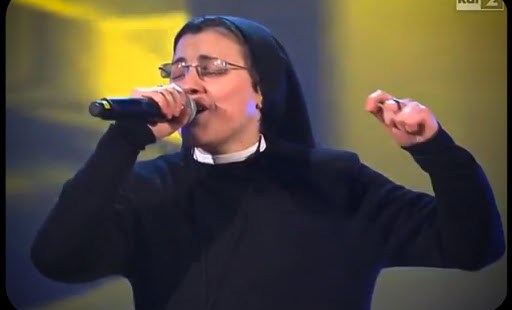 Pope Francis said we had to go out into the peripheries to spread the Word, but how far is too far?

Sister Cristina Scuccia stunned the world last Wednesday night with her powerfully sung rendition of Alicia Keys' No One at Italy’s version of The Voice.

The judges, when they turned around to guess who was singing, were just as jovially surprised as the audience.

In an interview with Rai News on Sunday, Sister Cristina gave her reasons for participating:

How did this passion of yours to sing come about?
"It was born in me together with me. Since I was little I’ve always sung, but obviously now with my choice of life, it’s completed itself, and so my song today should be a beautiful song, a song that gives a beautiful message of joy."

How did you have the idea to participate on the talent show?
"It came about thanks to Pope Francis who told us to go out into the peripheries and announce the gospel to all. And having a gift, I’ve put it at the disposition of everyone."

Why did you choose someone as deeply transgressive as J-AX to be your coach?
“Because he represents the youth of today, and if I want to go out and give testimony I have to go to the young people, so I chose him.”

The reaction in Italy to the young novice’s surprise move has been mixed. Some are hailing the sister with her heavenly voice as a model of evangelization; others think she has gone too far. Here is what some of our Italian readers think about it:

Corrado Stefanini
“The best example that a sister, a priest, a religious can and should give is that which transforms his or her life in unceasing prayer and dedication towards the spiritual and material necessities of the others: a lay Christian is called to live in the world in all the legitimate situations that are presented to them and nothing forbids them from participating in a talent show…

“But a person dedicated to God with a specific vocation – what’s she doing on stage singing and flailing around, ingeniously excited from the emotion of exhibiting herself before a stupefied public? And also, if all the sisters paraded around in the world of show business, who would there be left to pray? I must say that this is not the evangelization which we have need of: I need to see experts in the art of prayer that, out of love of God, dedicate their whole lives to serving others faithfully, heroically and humbly without leaving the position where they’re supposed to be.”

Domenico
“There are religious that have gifts of all sorts; they don’t hide them, and they do well not to. In this case the greatest gift of Sr Cristina was not her voice, but her habit, and the simple and joyful nearness of her fellow sisters. She had the courage to show it, to give her gift to us.

Elebig
“I would like to refer simply to the title of the pastoral letter of our cardinal Angelo Scola: ‘THE FIELD IS THE WORLD; ways to go and meet the human person.’

“I believe that the experience of Sr Cristina (who I know personally, as well as her fellow sisters, because they work in my parish. I therefore know their simplicity and humility, always with smiles on their faces) incarnates this title very well.”

Riccardo
“It is not dressing in a habit that evangelises, neither is it the singing. The question in this case is whether or not it is helpful for a young lady who has just began her journey of consecration. It is a problem of prudence regarding the care that her order has of their fellow sister, in the educative sense, in her spiritual direction and in the rules of life that lead to Christ. Certainly the order will have a boost in vocations. But is this really evangelization?”

Edy Gotta Rosio
“Could it be that Sister Cristina at 25 years old went to talk with and ask permission from her fellow sisters? …and that they told her that going and announcing the Gospel could be for her – for her particular gifts – going and venturing on TV (but not restricted to this)? Maybe “to evangelize” for her means above all to express what faith in the Lord has given to her: THE JOY OF LIVING A FULL LIFE IN CHRIST.”

Palmarita Guida
“But has someone paid attention to the words of the song?… if someone understood it as speaking of God, of Beauty, of true Love, of holiness….then the sister has evangelized, otherwise the only gift she has offered is her voice as a natural talent.

“More than evangelize the sister shocked those present…. To evangelize in art, there must also be prayer. I didn’t see this here. At times we say that to “go out” from our ecclesial boundaries is already in itself evangelisation: but we need to pay attention to where we are going and what it is that we do…”

Deb
“It is true that it is not enough to simply do something ‘non-conventional’ in order to evangelise, but she also added that God doesn’t take anything away from us, rather He gives us more than we could ask for. Often in life to follow the Lord means making big sacrifices and this stops us from saying ‘Yes’. She wants to show us precisely this: that we have to be faithful to God, because the dreams that we have in our hearts, are inspired by Him and He wants to help us realise them, not to abandon us.”

I suppose the question at hand is: Can we go so far into those peripheries that we end up actually living the life that we are trying to change?

“An evangelizing community gets involved by word and deed in people’s daily lives; it bridges distances, it is willing to abase itself if necessary, and it embraces human life, touching the suffering flesh of Christ in others. Evangelizers thus take on the “smell of the sheep” and the sheep are willing to hear their voice.”

However, in refering to temptations involved with evangelizing, he also says:

“Spiritual worldliness, which hides behind the appearance of piety and even love for the Church, consists in seeking not the Lord’s glory but human glory and personal well-being. …It is a subtle way of seeking one’s 'own interests, not those of Jesus Christ' (Phil 2:21).”

It seems that the challenge for Sr Cristina would be to resist any temptation brought about by media attention e.g. to begin desiring the approval of the crowd; that she continue to seek her approval solely from Christ, remembering that during this talent show her primary mission is to spread the Word of God.

What does the American audience make of it? Feel free to leave your opinion in the comments section.