The Key to Ending Domestic Violence Is… Womenpriests? 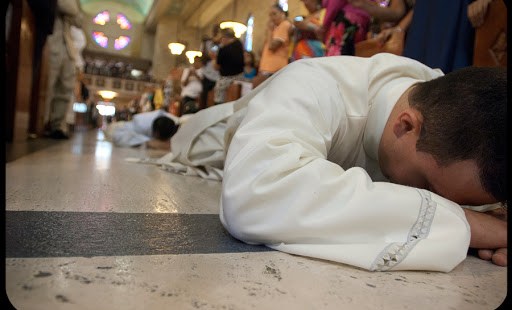 I applaud Jimmy Carter for shining light on many terrible injustices against women – but the male-only priesthood is not one of them.

It’s wrong to pay women less just because they are women. Girls should have access to education. Domestic violence is always unacceptable. And sex-slavery is a terrible, often hidden plague throughout the world, even in our own backyard. All of these things need to be talked about more often and fought against more intentionally.

But is the fact the Catholic priesthood is restricted to males partly the blame for these things?

No, but former U.S. president Jimmy Carter is telling people that it is.

In a recent MSNBC interview promoting his new book Call to Action: Women, Religion, Violence, and Power, he explains, “The Catholic Church and the Southern Baptist Convention and others quite often say, 'Well, women are not qualified to have an equal role in the service of God as men.' And of course, men all over the world take this as a proof that they can abuse their wives or pay less pay.”

In other words, he thinks there’s a straight line from the male-only priesthood to wife-beating. (If this strikes you as a big jump, it’s because it is.)

Against this dangerous, confused thinking, he says, the Bible teaches that men and women are equal.

I applaud Carter’s efforts to shine more light on the many injustices against women throughout the world, and in particular appreciate his willingness as a self-identified Democrat to speak out against sex-selective abortions. But he’s wrong about the Catholic priesthood: it’s not an injustice that only men can be priests, and it doesn’t encourage real injustice against women.

He’s of course absolutely correct that the Bible teaches that men and women are equal in dignity and value. Both are made in the image of God, and both can be equal members of the Body of Christ. No one disputes this point, and the equal value and dignity of men and women is official Catholic Church teaching.

But it doesn’t therefore follow that women can and should be priests. Why? Because men and women are different and have complementary roles.

I know, to many modern ears this sounds like a contradiction. How can men and women be equal if they are different? Because equality doesn’t mean identity.

It’s particularly strange that secularism, which ordinarily operates from a materialist view of the world, often denies one of the most obvious material facts about human beings: that men and women are objectively different.

And because of these real differences, there are some things that are exclusive to one sex or the other – and that’s okay.

For example, is it a grave injustice that men can’t bear children? If we accept this fact are we being “slaves to biology”? Should we be pursuing technologies that would allow us to “liberate” men and finally end this injustice?

Of course not. The inability to bear children is not a loss for men anymore than it’s a loss they can’t flap their arms and fly away. Neither are in accord with the nature of a man.

Now, the Church doesn’t argue that women lack the intelligence or managerial skills to do the types of things that priests do, as Carter seems to imply. That’s not an issue at all (and in fact, even if a male wants to become a priest, he has to demonstrate he has the right skills – not all men are cut out for being a priest). Rather, the Church argues that the priesthood is inherently male because of what a man is rather than because of what a man can do. More specifically, the priest stands in the place of Christ as the bridegroom of the Church the bride, and Christ was a man (yes, bridegrooms can only be men).

And the same Bible that Carter correctly points out teaches that men and women are equal in dignity also clearly teaches these very things, particularly in the letters of St. Paul. But the clearest example of how the Church should go about choosing her priests comes from Jesus himself.

The clergy today are successors of the Apostles, who were disciples hand-picked by Jesus to lead the Church – and they were all men. (Regarding the case of “Junia” for those well-studied on this issue, Jimmy Akin explains that the name can be either male or female, and that the verse may not even be calling that person an apostle anyway. Besides, if Jesus really did ordain men and women as Apostles equally, we’d have more evidence of it besides a single vague verse.) The Church has followed Christ’s example without exception for the last two thousand years.

This gives a different meaning to what Stephen Colbert said to Carter when he appeared on Colbert’s show recently. Playing his ultra-conservative character, Colbert told Carter, “Our freedom of religion allows me to interpret the Bible exactly how it fits my world view already.” The implication was that the male-only priesthood is something “conservatives” just want the Bible to teach even though it doesn’t. But in fact, what Colbert said describes what Carter is doing. Christians from the very beginning have always understood the priesthood to be inherently restricted to males. Carter is the one trying to take a modern view of men and women and make the Bible fit it.

It’s also worthwhile to correct another mistake Carter makes: he says the male-only priesthood means women do not have “an equal role in the service of God.” Again, if he means “equal” in the sense of “identical,” he’s correct. But if he means “equal” in the sense of “same worth or importance,” he’s wrong. As Bl. John Paul II reminded us, the goal of the Christian life is not accumulation of power, but love and holiness: “the only better gift, which can and must be desired, is love. The greatest in the Kingdom of Heaven are not the ministers but the saints.” Indeed, Catholics believe that a woman, the Blessed Virgin Mary, holds the highest creaturely place in heaven, while it’s very possible that many popes are in hell.

Since the male-only priesthood is not unjust and does not mean that women lack an important, even indispensable role in the Church and the world, Carter’s argument about it encouraging real injustices simply doesn’t hold. Far from encouraging those injustices, the Catholic Church wholeheartedly condemns injustices like domestic violence and pay discrimination, and does so without any inconsistency.

Pope Francis said recently, “Women in the Church must be valued, not ‘clericalized.’” The solution to injustice against women is love – which includes respecting legitimate differences between the sexes.