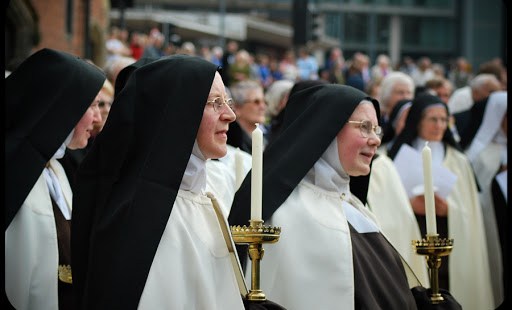 Carmelites bring an example of joy to Catholic Indian Mission.

Two groups of religious sisters new to North Dakota’s Diocese of Bismarck bring the blessings of prayer and their examples of faith and service to the area, an official with the local Church said.

“One of the things you see about both of these groups of sisters is that they live lives of joy,” Matthew Kurtz, communications director for the Bismarck diocese, told CNA March 28.

“They exude joy; that will be one of the most valuable aspects of having their presence in our diocese.”

Two groups, each of four religious sisters, have moved to the Diocese of Bismarck.

Four sisters from the Congregation of Teresian Carmelites have moved from their home in India’s Kerala state to serve the people of the Standing Rock Indian Reservation in south-central North Dakota. The sisters are working through the Bismarck diocese’s Catholic Indian Mission.

They are the first foundation of the Teresian Carmelites in the Western Hemisphere. They will work as missionaries and help the priests and parishes of Sioux County, while teaching at the St. Bernard Mission School in Fort Yates.

They will live at St. Bernard’s Carmel Convent in Fort Yates, the property of the renamed Church of St. Peter, and replace the departing School Sisters of Notre Dame.

“It’s important to have the presence of holy people who can model what a life of faith should look like,” Kurtz said. “They’re also very obviously knowledgeable in the Catholic faith and so they can evangelize to the people on the reservation and set a good example that what is valuable to them as they live a life that is for Christ and has meaning and purpose because it is lived for God.”

Another group of four religious sisters is new to the diocese as well. Four cloistered Carmelite nuns from Alexandria, South Dakota moved to their new monastery March 19.

Their monastery, the Carmel of the Holy Face, is a renovated farmhouse near Hague in the state’s south central Emmons County. The nuns described it as “in the middle of nowhere.”

“We value our enclosure because it’s part of our sacrifice for the diocese and the world,” Mother Marie Therese told the Bismarck diocese. “Once the bishop erects the cloister, he locks us in.”

The cloistered Carmelites will host a three-day open house April 23-25 to meet with the public before they begin their enclosure. They fast during half of the year, eating only one full meal and two smaller meals each day. They do other forms of penance, including sleeping on a slab of wood with a simple straw mattress. They refrain from all dairy products during Lent, and never eat meat.

Kurtz added that the religious sisters have emphasized that they have “a life of joy … people see all these penances and things that they do as just a burden. It’s absolutely the opposite,” he told CNA.

He said the power of prayer is “undeniable,” and the diocese will benefit from sisters who are “immersed in deep prayer every day.”

The cloistered sisters will become self-sufficient through growing their food in gardens and raising goats, chickens, and other animals. They also hope to begin to make items such as scapulars and Chaplets of the Holy Face to sustain their life.

The cloistered sisters moved to the diocese at the request of Bishop David Kagan, who had repeated the request of his predecessor Bishop Paul Zipfel.

The Congregation of Teresian Carmelites came at the invitation of Bishop Kagan after an Indian-born priest serving in western North Dakota made the connection between the diocese and their religious congregation, the Bismarck diocese reported.

“It’s good for fostering vocations beyond the diocesan priesthood and, always the most important thing, they’re going to be praying for our diocese every day.”

He cited Bishop Kagan’s words: “To have these prayers and sacrifices offered to God daily for us is the greatest of blessings.”