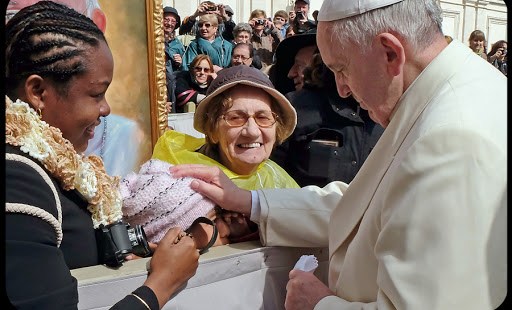 Jersey Vargas, the 10 year old daughter of undocumented immigrants who traveled from Los Angeles to the Vatican to ask the Pope’s help for herself and children like her, said she is thrilled to have met him.

“When I met the Pope I was very happy because he blessed me and told me he would talk to President Obama,” Vargas told CNA shortly after her March 26 meeting with Pope Francis.

Vargas was chosen as the representative of a group of immigration reform advocates who asked the Pope to intercede for them with Pope Francis, with whom he was to meet the following day.

She was born in the U.S., and her father is currently imprisoned in Indiana and at risk of being deported; Vargas has not seen him for more than two years.

“I needed to meet Pope Francis to explain my situation and that of my father to him,” Vargas said. “Right now he is in another state in the U.S. He has a deportation order and I am very afraid that they will deport him.”

She said that if she could meet with President Obama, “I would tell him to please listen to Pope Francis, because he has a very important message for you: ‘My father and thousands of other children and their families are in your hands, you have to help them.’”

“It is unfair that he gets to be with his girls, while we have to be separated from our fathers.”

Vargas also gave Pope Francis some 1,500 letters from children like herself who suffer from living apart from their parents because of U.S. immigration law.

“I told the Pope to please help us, because we are suffering. I was born in the United States, only my parents are Mexican,” Vargas explained.

“My father is a hard worker, he never rests. When he would come home late I could see his hands dirty from cement and dust. He came home tired and took off his shoes.”

Vargas met Pope Francis at the end of his General Audience in St. Peter’s Square, giving him, in addition to the letters, the gift of a handkerchief.

Vargas’ mother sewed into the handkerchief two birds and a nest, representing herself, her husband, and their home.

When they met, Pope Francis blessed Vargas, kissed her forehead, and told her, “I will talk to President Obama about it.”

Alicia Flores, director of “Hermandad Mexicana Transnacional” and a member of the delegation accompanying Jersey, told CNA, “we have come to send a message to President Obama via the Pope, asking the Pope that he would advocate for all the families who are going to be deported, as is Jersey’s family.”

Flores stressed that Obama has “deported more than 2 million people” – more than were deported during the eight years of George W. Bush’s administrations.

Obama “maintains he is deporting criminals,” she said, “while in truth he is deporting fathers whose only crime is that of giving a contribution to the country, since they are working, and of being without the proper documents.”

“Obama could give an executive order to stop the deportations and he has not. So there is no excuse for him to keep separating families and making these children like Jersey suffer.”

Following Thursday’s meeting between the Pope and Obama, the Holy See press office stated that “views were exchanged on some current international themes and it was hoped that, in areas of conflict, there would be respect for humanitarian and international law and a negotiated solution between the parties involved.”

“In the context of bilateral relations and cooperation between Church and State, there was a discussion on questions of particular relevance for the Church in (the U.S), such as the exercise of the rights to religious freedom, life and conscientious objection, as well as the issue of immigration reform. Finally, the common commitment to the eradication of trafficking of human persons in the world was stated.”