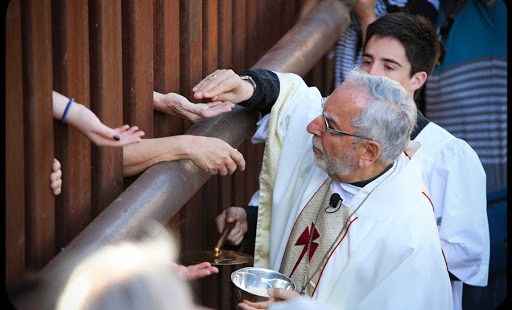 A group of U.S. bishops visited the U.S.-Mexico border Tuesday to say Mass in remembrance of migrants who died during their journey, calling attention to the humanitarian consequences of American immigration policy.

"Human beings are dying on both sides of this wall," said Cardinal Séan O'Malley of Boston April 1.

“We are judged by how we treat the most vulnerable among us,” he said during a news conference following the Mass, at which he preached.

He urged Congress to take action, saying that laws "must change, if they undermine human dignity."

The trip was inspired by Pope Francis' 2013 trip to Lampedusa to pray for immigrants who died traveling to Europe. The bishops laid a wreath at the border wall, echoing the Pope's placement of a wreath in the Mediterranean Sea.

Cardinal O'Malley said his work with the migrant community "helped me to glimpse the hardships and humiliations of so many immigrants who come to the States fleeing from poverty and oppression, seeking a better life for their children."

“Sadly enough, many immigrants spend years without the opportunity to see their loved ones.”

“How many rural areas are peopled by grandparents taking care of little grandchildren because the parents are off in the United States working to send money back home?”

The cardinal also spoke to the deadly conditions facing migrants crossing the border, including harsh conditions and animals in the desert, as well as violence from drug traffickers.

"We know that the border is lined with unmarked graves of thousands who die alone and nameless.” He noted that more than “400 bodies are found here at the border” every year – and that there are countless others that are not found.

The Gospel reading for the Mass told the parable of the Good Samaritan, a reading, Cardinal O'Malley said, that shows us “that people who belong to God’s covenant community show love that is not limited by friendship and propinquity, but a love that has a universal scope and does not look for recompense.”

“We come here today to be a neighbor, and to find a neighbor in each of the suffering people who risk their lives and at times lose their lives in the desert.”

The cardinal also added that while the U.S. benefits greatly from the contributions of immigrants as they pay into Social Security, Medicare, and other social programs they are unable to benefit from, more than “10 million undocumented immigrants are exposed to exploitation and lack access to basic human services.”

"The system is broken and is causing untold suffering and a tenable waste of resources, human and material.”

Other bishops present also spoke out in support of immigration reform.

“As a moral matter, our nation can no longer employ an immigration system that divides  families and denies basic due process protections to our fellow human beings,” said Bishop Eusebio Elizondo Almaguer, auxiliary bishop of Seattle.

With "as many as 100,000 children separated from their parents each year," Bishop Elizondo continued, "there is a large social cost to inaction."

"Under our current immigration system we're weakening this great nation of ours," commented Bishop John Wester of Salt Lake City.

"To be honest, it is a stain on the soul of our nation, one we must eradicate with comprehensive immigration reform."