Pope Francis: Married Couples Are an Icon of God’s Love 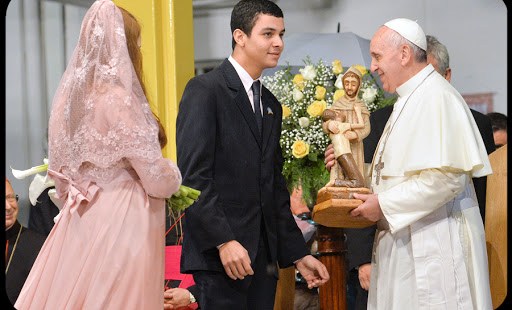 Pope Francis reflects on the vocation of marriage.

In his weekly general audience Pope Francis closed his catechesis on the sacraments by reflecting on the vocation of marriage, noting that the marital couple is a unique example of divine love in the world.

“Married couples carry out this vocation in a full and definitive communion of life. As ‘one flesh,’ they become living icons of God’s love in our world, building up the Church in unity and fidelity,” the Pope expressed in his April 2 general audience address.

Speaking to the thousands gathered in St. Peter’s square to hear the weekly discourse, the pontiff announced that the day’s reflections would close his catechesis on the sacraments as he turns to the Sacrament of Holy Matrimony.

It is a sacrament, he observed, “which brings us to the very heart of God’s loving plan for the human family” and “introduces us to the design of God, who created man in his image, capable of loving.”

“The Triune God created us – men and women – in his image and calls us to mirror the mystery of his love,” the Pope continued, adding that “married couples carry out this vocation in a full and definitive communion of life.”

Highlighting how the vocation builds the Church in “unity and fidelity,” the pontiff explained that “Christian marriage also reflects the mystery of Christ’s own faithful and sacrificial love for his body, the Church.”

“Christian spouses thus receive a special consecration and a special mission: to manifest in simple and daily things the love of Christ for his Church, giving themselves in fidelity and service.”

Noting that although marriage is “a noble vocation,” Pope Francis also emphasized that it “is not an easy one,” and that “it must constantly be strengthened by a living relationship with the Lord through prayer.”

These prayers include “mornings and evenings, at meals, in the recitation of the Rosary, and above all through the Sunday Eucharist.”

Concluding his address, the Roman Pontiff asked those present to pray with him “for all families, especially those experiencing difficulties, so that by God’s mercy they can always be joyful models of faith, love and generous service in our communities.”

After finishing his discourse, the Pope took a moment to acknowledge how April 2 marks the 9th anniversary of Bl. John Paul II’s death, stating that the occasion “directs our thoughts to the day of his canonization, which we will celebrate at the end of the month.”

“May the waiting of this event be for us an occasion to prepare spiritually and to revive the patrimony of the faith that he left,” he expressed.

By “(i)mitating Christ he was for the world a tireless preacher of the Word of God, of the truth and of the good,” the pontiff observed, noting that “He did good even with his suffering.”

“This was his life's teaching, to which the People of God responded with great love and esteem. His intercession strengthens in us faith, hope and love,” the Pope reflected, adding that “during this preparation my apostolic blessing will accompany you.”