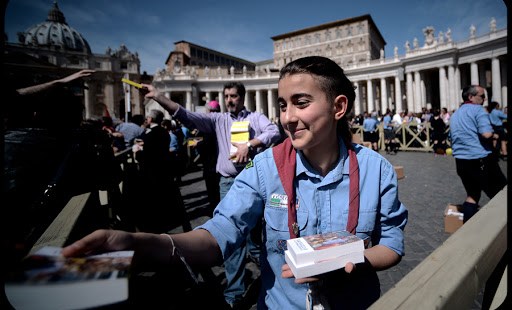 Pope seeks to encourage individuals to reflect on the Word of God.

Pope Francis handed out free pocket-sized copies of the gospels to crowds filling St. Peter’s square for the Sunday Angelus , as an encouragement to read the Word of God.

“Last Sunday I suggested that you get a little copies of the gospels, to carry with you during the day, to read often. Then I thought over the ancient tradition of the Church, during Lent, to give the gospel to catechumens preparing for baptism. So today I want to offer to you who are here in the piazza – but as a sign for all – a pocket-sized gospel. They will be distributed to you freely,” the Pope explained on April 6.

“Take one, carry it with you: it is truly Jesus who speaks to you,” he urged those packed into the square. “This is the word of Jesus!”

The Holy Father then asked that the faithful remember Christ’s words, “freely have you received, freely give!” so that they too would “give the message of the gospel” to others.

Pope Francis acknowledged that some may be skeptical of a free gift, asking “how much does it cost? How much must I pay, father?”

“But let’s do something,” he suggested. “In exchange for this gift, do an act of charity, a free gesture of love for another: a prayer for a friend, a reconciliation, something.”

The pontiff’s Angelus reflection focused on the story of Jesus’ raising Lazarus from the dead, a sign of Jesus’  own resurrection and the hope for our eternal life.

The Pope explained that Jesus’ resurrection also affects our earthly lives by inviting us “to get out of the tomb into which our sins have caused us to collapse.”

“He calls us insistently to leave the darkness of prison in which we are confined, contenting ourselves with a false, selfish, mediocre life. ‘Come out!’ he says.”

Just as Lazarus was unbound from his burial clothes, “let us be free from the ‘bandages’ of pride,” urged Pope Francis.

“Our resurrection begins here: when we decide to obey the command of Jesus, coming to the light, to life.”

Pope Francis reminded his listeners that it is never too late to repent of sin and turn to Christ, because “there are no limits to the divine mercy offered to all.”

“Repeat it together with me!” he exclaimed. “There are no limits to the divine mercy offered to all!”

He then led the crowds in the Angelus prayer and took a moment to remember the genocide in Rwanda, as April 7 marks its tragic 20th anniversary.

“I want to express my paternal closeness to the Rwandan people, encouraging them to continue, with determination and hope, the process of reconciliation that has already manifested its fruit,” said the Pope.

“To everyone I say: Don’t be afraid! Build your society on the rock of the gospel, in love and in harmony, because only like this can you build lasting peace!”

The Pontiff also recalled the earthquake that shook the Italian town of Aquila five years ago today, killing almost 300 people, injuring 1,500, and leaving nearly 65,000 homeless. “At this time we want to unite ourselves with that community which has suffered so much, and still suffers, struggling and hoping, with great faith in God and in the Virgin Mary.”

He also went on to pray for the victims of the Ebola virus that is spreading in Guinea and neighboring countries. “May the Lord sustain the efforts to combat this epidemic and provide care and assistance to all those in need.”

Pope Francis concluded by greeting the various pilgrim groups who were present in St. Peter’s square, and reminded everyone to read the gospels.

Whether in a book or on a smartphone or tablet, said the Pope, “the important thing is to read the word of God, with all means, but read the word – it’s Jesus who speaks there! And welcome it with an open heart. So the good seed bears fruit!”